Lawrence in Arabia: War, Deceit, Imperial Folly and the Making of the Modern Middle East (Paperback) 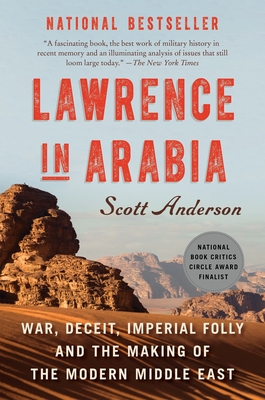 Lawrence in Arabia: War, Deceit, Imperial Folly and the Making of the Modern Middle East (Paperback)

Anderson deftly juxtaposes the story of Lawrence and three other young diplomatic adventurers. The result is a fascinating, highly entertaining read which explains how the modern Middle East was created by imperial ambitions and why it is such a source of conflict today.

One of the Best Books of the Year:
The Christian Science Monitor
NPR
The Seattle Times
St. Louis Post-Dispatch
Chicago Tribune

Finalist for the National Book Critics Circle Award in Biography

The Arab Revolt against the Turks in World War I was, in the words of T. E. Lawrence, “a sideshow of a sideshow.” As a result, the conflict was shaped to a remarkable degree by a small handful of adventurers and low-level officers far removed from the corridors of power.

At the center of it all was Lawrence himself. In early 1914 he was an archaeologist excavating ruins in Syria; by 1917 he was riding into legend at the head of an Arab army as he fought a rearguard action against his own government and its imperial ambitions. Based on four years of intensive primary document research, Lawrence in Arabia definitively overturns received wisdom on how the modern Middle East was formed.

Scott Anderson is a veteran war correspondent who has reported from Lebanon, Israel, Egypt, Northern Ireland, Chechnya, Sudan, Bosnia, El Salvador and many other strife-torn countries. A frequent contributor to the New York Times Magazine, his work has also appeared in Vanity Fair, Esquire, Harper’s and Outside. He is the author of novels Moonlight Hotel and Triage and of non-fiction books The Man Who Tried to Save the World and The 4 O’Clock Murders, and co-author of War Zones and Inside The League with his brother Jon Lee Anderson.
“A fascinating book, the best work of military history in recent memory and an illuminating analysis of issues that still loom large today. . . . Fine, sophisticated, richly detailed . . . filled with invaluably complex and fine-tuned information. . . . Eminently readable. . . . For those already fascinated by Lawrence’s exploits and familiar with his written accounts of them, Mr. Anderson’s thoughtful, big-picture version only enriches the story it tells. . . . Beyond having a keen ear for memorable wording, Mr. Anderson has a gift for piecing together the conflicting interests of warring parties. . . . It’s a big book in every sense, with a huge amount of terrain to cover.”
—The New York Times

“Brilliant. . . . A dazzling accomplishment that combines superb historical research with a compelling narrative.”
—The Seattle Times

“Thrilling. . . . Galvanizing and cinematic. . . . Anderson brilliantly evokes the upheavals and head-spinningly complex politics of an era. . . . It’s a huge assignment, explaining the modern roots of the region as it emerged from the wreckage of war. But it is one that Anderson handles with panache. . . . His story is character-driven, exhilaratingly so. . . . Shows how individuals both shape history and are, at the same time, helpless before the dictates of great power politics.”
—The Boston Globe

“Cuts through legend and speculation to offer perhaps the clearest account of Lawrence’s often puzzling actions and personality. . . . Anderson has produced a compelling account of Western hubris, derring-do, intrigue and outright fraud that hastened—and complicated—the troubled birth of the modern Middle East.”
—The Washington Post

“Superbly fine-tuned. . . . Anderson does a fine job of piecing together the many conflicting Middle East interests. . . . An original, illuminating history that requires and rewards close attention.”
—Janet Maslin, Top 10 Favorite Books of the Year, The New York Times

“[Anderson’s] expansive, mesmerizing, and—dare one say—cinematically detailed Lawrence in Arabia exemplifies the ways biography and history can enhance each other.”
—The Wall Street Journal

“No four-hour movie can do real justice to the bureaucratic fumblings, the myriad spies, heroes and villains, the dense fugue of humanity at its best and worst operating in the Mideast war theater of 1914-17. Thrillingly, Scott Anderson’s Lawrence in Arabia (four stars out of four) does exactly that, weaving enormous detail into its 500-plus pages with a propulsive narrative thread”
—USA Today

“Invigorating. . . . Through his large cast, Anderson is able to explore the muddles of the early 20th-century Middle East from several distinct and enlightening perspectives. . . . [An] engrossing, thoughtful and intricate account.”
—The New York Times Book Review

“Anderson carries his erudition lightly, but there’s enough scholarship there to make an academic proud. As with the best kind of yarns, you don’t realize what you’ve learned until the narrator goes silent.”
—The Daily Beast

“[A] well-researched, sweeping account . . . fresh and compelling. . . . A gripping narrative. . . . The book’s broader achievement is that it reveals the incompetence and deceit of Lawrence’s British superiors in shaping the postwar Middle East.”
—Minneapolis Star Tribune

“Anderson’s well-told tale of war, betrayal and depressing short-sightedness is also a vivid reminder of why the Middle East continues to preoccupy us.”
—Richmond Times-Dispatch

“Anderson’s magisterial study puts a complicated picture in context, showing how major powers’ old follies led to the wars, religious strife and brutal dictatorships that now pollute the development of the Middle East.”
—The Buffalo News

“Renders painfully clear how deeply the political structure of the Middle East has been born of eccentric fantasies.”
—Esquire

“One of the more fascinating reads I have encountered in years. [Anderson’s] cast of characters alone satisfies one’s appetite for how espionage really works in the field.”
—Joseph C. Goulden, The Washington Times

“Lawrence of Arabia is said to have reinvented warfare, and Scott Anderson has now reinvented Lawrence. . . . Anderson brilliantly illuminates how the modern Middle East came to be. The research in this book is so daringly original, and the writing so spectacular, that it feels like I’m reading about the topic for the first time. A deep and utterly captivating reading experience.”
—Sebastian Junger, New York Times bestselling author of War and The Perfect Storm

“A startlingly rich and revealing portrait of one of history’s most iconic figures. . . . Anderson is an exquisite writer and dogged researcher, whose accounts of century-old brutalities are made utterly convincing by the knowledge that he has personally witnessed the sort of offhanded horror he’s unearthed in archives. Lovers of big 20th-century history will be in nirvana.”
—Tom Reiss, Pulitzer Prize-winning author of The Black Count and The Orientalist

“An amazing accomplishment. Lawrence in Arabia captures the bravado, surreality, grandeur of the Middle East in the birth throes of the 20th century. . . . This is history of the most vivid and relevant order.”
—Doug Stanton, New York Times bestselling author of Horse Soldiers and In Harms’ Way

“Lawrence in Arabia is a work of serious research and powerful insight, but it is so rich in incredible stories and glittering details that it felt like a guilty pleasure while I was reading it. Completely absorbing, sweeping in scope and riveting from the first word, this is a book that will stay with me for a long time.”
—Candice Millard, New York Times bestselling author of Destiny of the Republic and River of Doubt

“Here is an intimate history painted on a very large canvas, with one fantastically charismatic—and fabulously flawed—man at the dusty center of the tale.”
—Hampton Sides, New York Times bestselling author of Ghost Soldiers and Hellhound on His Trail