Every Day by the Sun: A Memoir of the Faulkners of Mississippi (Hardcover) 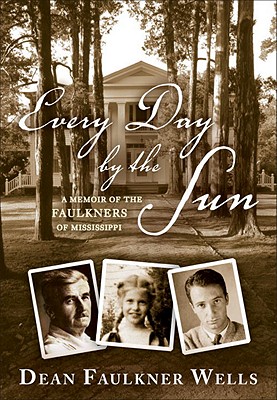 Every Day by the Sun: A Memoir of the Faulkners of Mississippi (Hardcover)

A fascinating and splendidly rendered memoir. Interesting not only for its keen insights into Faulkner (and new info about him), but simply a wonderful account of growing up as a girl in the small-town south. Great read!

In Every Day by the Sun, Dean Faulkner Wells recounts the story of the Faulkners of Mississippi, whose legacy includes pioneers, noble and ignoble war veterans, three never-convicted mur­derers, the builder of the first railroad in north Mississippi, the founding president of a bank, an FBI agent, four pilots (all brothers), and a Nobel Prize winner, arguably the most important Ameri­can novelist of the twentieth century. She also reveals wonderfully entertaining and intimate stories and anecdotes about her family—in particular her uncle William, or “Pappy,” with whom she shared color­ful, sometimes utterly frank, sometimes whimsical, conversations and experiences.              This deeply felt memoir explores the close re­lationship between Dean’s uncle and her father, Dean Swift Faulkner, a barnstormer killed at age twenty-eight during an air show four months be­fore she was born. It was William who gave his youngest brother an airplane, and after Dean’s tragic death, William helped to raise his niece. He paid for her education, gave her away when she was married, and maintained a unique relationship with her throughout his life.                         From the 1920s to the early civil rights era, from Faulkner’s winning of the Nobel Prize in Literature to his death in 1962, Every Day by the Sun explores the changing culture and society of Oxford, Mis­sissippi, while offering a rare glimpse of a notori­ously private family and an indelible portrait of a national treasure.

DEAN FAULKNER WELLS is the niece of William Faulkner and the daughter of Dean Swift Faulkner and Louise Hale. She is the author of, among other works, "The Ghosts of Rowan Oak: William Faulkner's Ghost Stories for Children "and is the editor of "The New Great American Writers Cook-book "and "The Best of Bad Faulkner. "She lives with her husband, Larry Wells, in Oxford, Mississippi, where they run Yoknapatawpha Press, a regional publishing house that focuses on southern writers.

"Nobody could have written this book except Dean Faulkner Wells. It is not only charming, poignant and witty, it is a priceless contribution to America's rich literary history."—Winston Groom, author, Forrest Gump"Dean Faulkner Wells has written a memorable family story, full of the intimacies of place and cherished connections, that not incidentally sheds unexpected, humanizing light on her august uncle, William Faulkner."--Thomas McGuane"A funny, extremely readable, incredibly likable memoir of what it was like to grow up with the great man….A wonderful book."--Mark Childress, author of Crazy in Alabama"Read Every Day by the Sun, then read Go Down Moses, The Hamlet, The Town, The Mansion, and you will feel you have been on an archaeological dig with a master. Dean Faulkner Wells knows where the gold is buried, where the heart strings sang, where the understanding and love were engendered….Burn the deconstructionists’ texts. Every day By The Sun is all you need."—Ellen Gilchrist "I can't recall the last time I enjoyed a book as much as Every Day By The Sun. Dean Faulkner Wells has performed a miracle: She’s brought a great man back to life, and in doing so she’s summoned a time and a place that now seem too far gone. I love her clean, sharp, unpretentious prose, the well-hewn stories piled one on top of the other, the intimate revelations about a family that belongs to all of us but belonged to her first. William Faulkner is a fascinating character indeed, but it is Wells herself whom I found most captivating. She’s somebody to fall in love with and never get over."--John Ed Bradley, author, Tupelo Nights"A fresh, affectionate view of 'Pappy,' the great and difficult writer."--Roy Blount, Jr."Part biography, part memoir, Wells' work does much to humanize the man who is often remembered only for his words. A must-read for Faulkner-philes."--Kirkus "Marvelously evocative, intimate, and deeply moving."--John Berendt