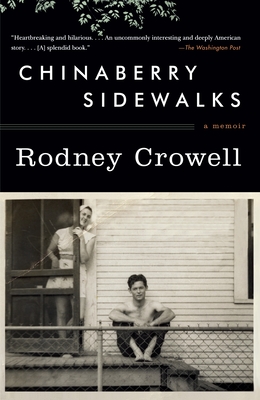 Rodney Crowell is a gifted and accomplished songwriter. Turns out he's equally gifted as a storyteller and writer. This is a vivid and fascinating account of Rodney's tough childhood in Houston, TX and how it led to who he is today. Love this book!

In a tender and uproarious memoir, singer-songwriter Rodney Crowell reveals the good, the bad, and the ugly of a dirt-poor southeast Texas boyhood.

The only child of a hard-drinking father and a holy-roller mother, acclaimed musician Rodney Crowell was no stranger to bombast. But despite a home life always threatening to burst into violence, Rodney fiercely loved his mother and idolized his blustering father, a frustrated musician who took him to see Hank Williams, Jerry Lee Lewis, Carl Perkins, and Johnny Cash perform. Set in 1950s Houston, a frontier-rough town with icehouses selling beer by the gallon on payday, pest infestations right out of a horror film, and the kind of freedom mischievous kids dream of, Chinaberry Sidewalks is Rodney's tribute to his parents and his remarkable youth.  Full of the most satisfying kind of nostalgia, it is hardly recognizable as a celebrity memoir.  Rather, it's a story of coming-of-age at a particular time, place, and station, crafted as well as the perfect song.