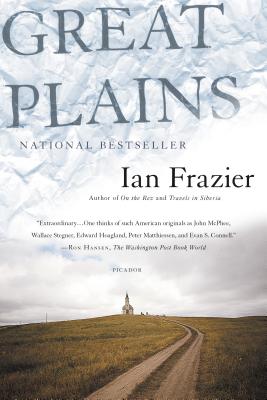 Most travelers only fly over the Great Plains--but Ian Frazier, ever the intrepid and wide-eyed wanderer, is not your average traveler. A hilarious and fascinating look at the great middle of our nation.

With his unique blend of intrepidity, tongue-in-cheek humor, and wide-eyed wonder, Ian Frazier takes us on a journey of more than 25,000 miles up and down and across the vast and myth-inspiring Great Plains. A travelogue, a work of scholarship, and a western adventure, Great Plains takes us from the site of Sitting Bull's cabin, to an abandoned house once terrorized by Bonnie and Clyde, to the scene of the murders chronicled in Truman Capote's In Cold Blood. It is an expedition that reveals the heart of the American West.

Ian Frazier is the author of Travels in Siberia, Great Plains, On the Rez, Lamentations of the Father and Coyote V. Acme, among other works, all published by Farrar, Straus and Giroux. He graduated from Harvard University. A frequent contributor to The New Yorker, he lives in Montclair, New Jersey.

“This is a brillant, funny, and altogether perfect book, soaked in research and then aired out on the open plains to evaporate the excess, leaving this modern masterpiece. It makes me want to get in a truck and drive straight out to North Dakota and look at the prairie.” —Garrison Keillor

“History written with passion and delight... Frazier is a great storyteller.” —Newsweek