On the Rez (Paperback) 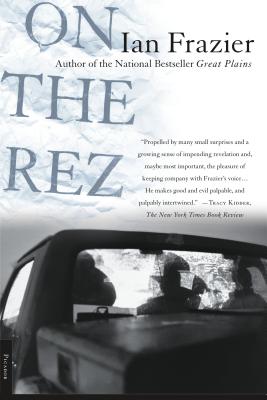 On the Rez (Paperback)

On the Rez is a sharp, unflinching account of the modern-day American Indian experience, especially that of the Oglala Sioux, who now live on the Pine Ridge Indian Reservation in the plains and badlands of the American West. Crazy Horse, perhaps the greatest Indian war leader of the 1800s, and Black Elk, the holy man whose teachings achieved worldwide renown, were Oglala; in these typically perceptive pages, Frazier seeks out their descendants on Pine Ridge—a/k/a "the rez"—which is one of the poorest places in America today.

Along with his longtime friend Le War Lance (whom he first wrote about in his 1989 bestseller, Great Plains) and other Oglala companions, Frazier fully explores the rez as they visit friends and relatives, go to pow-wows and rodeos and package stores, and tinker with a variety of falling-apart cars. He takes us inside the world of the Sioux as few writers ever have, writing with much wit, compassion, and imagination. In the career of SuAnne Big Crow, for example, the most admired Oglala basketball player of all time, who died in a car accident in 1992, Frazier finds a contemporary reemergence of the death-defying, public-spirited Sioux hero who fights with grace and glory to save her followers.

On the Rez vividly portrays the survival, through toughness and humor, of a great people whose culture has helped to shape the American identity.

Ian Frazier is the author of Travels in Siberia, Great Plains, On the Rez, Lamentations of the Father and Coyote V. Acme, among other works, all published by Farrar, Straus and Giroux. He graduated from Harvard University. A frequent contributor to The New Yorker, he lives in Montclair, New Jersey.

“[Frazier] makes an eloquent and impassioned argument for the United States government 's giving back the Black Hills to the Sioux. And he provides some artful digressions on Sioux ideals of heroism, on the Lakota language, and on Indian superstitions and lore . . . As for Mr. Frazier's accounts of his own travels, they are enlivened by a keen eye for detail, and the same delightful sense of the absurd that animated his humor collections.” —Michiko Kakutani, The New York Times

“An astute, personal, and disarmingly frank assessment of life and conflict among the Oglala Sioux on South Dakota's Pine Ridge Reservation . . . [A] remarkably thorough and thoroughly eclectic study.” —Kirkus Reviews

“Frazier's account of Pine Ridge and of his uncommon friendship with Le War Lance is engaging, resonant.” —Evan S. Connell

“A wonderful, painful guidebook to a bitter beautiful land. It all rang true to me.” —Martin Cruz Smith

“Funny, playful, sly, On the Rez may be the best and most truthful book about the American Indian available today.” —Milwaukee Journal Sentinel

“[Frazier] is like an archaeologist of social sensibilities, paying rapt attention to dialect, landscapes, sounds, and political quirks, then displaying them in artfully simple sentences.” —The New Yorker

“To render the complicated truth, to make a reader see . . . that something wonderful about the American Indian flourishes even in the midst of what one of the residents of Pine Ridge describes as 'just a slum' --that is very difficult. Frazier knows the difference between real emotion and its counterfeits. In his philosophy, there is room for sentiment, and in this book he makes good and evil palpable, and palpably intertwined.” —Tracy Kidder, The New York Times Book Review