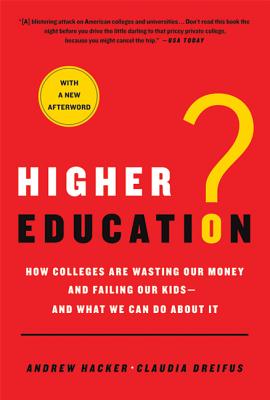 A quarter of a million dollars. It's the going tab for four years at most top-tier colleges. Why does it cost so much and is it worth it?

In this provocative investigation, the renowned sociologist Andrew Hacker and New York Times writer Claudia Dreifus make an incisive case that the American way of higher education—now a $420 billion-per-year business—has lost sight of its primary mission: the education of our young people. They probe the true performance of the Ivy League, the baleful influence of tenure, an unhealthy reliance on part-time teachers, and supersized bureaucracies which now have lives of their own.

Hacker and Dreifus take readers from Princeton and Harvard to Evergreen State, revealing those institutions that need to adjust their priorities and others that are getting it right, proving that learning can be achieved—and at a much more reasonable price. Higher Education? is a wake-up call and a call to arms.

ANDREW HACKER is the author of the bestselling book Two Nations: Black and White, Separate, Hostile, Unequal, and writes regularly for the New York Review of Books and other publications. He is a professor at Queens College.

Claudia Dreifus has been a journalist since the 1960s. Before coming to the Science Times section of The New York Times, she was known for her incisive interviews with international political figures and cultural icons. Her work has appeared in The New York Times Magazine, Playboy, Ms., The Progressive, and Modern Maturity. A Senior Fellow at the World Policy Institute of the New School for Social Research, she lives in New York City.

“[A] blistering attack on American colleges and universities... Don't read this book the night before you drive the little darling to that pricey private college, because you might cancel the trip.” —USA Today

“Andrew Hacker and Claudia Dreifus have written a lucid, passionate and wide-ranging book on the state of American higher education and what they perceive as its increasing betrayal of its primary mission. . . . In a series of well-structured and strongly argued chapters, the book [poses] searching and sometimes troubling questions.” —The New York Times

“A powerful indictment of academic careerism. The authors are not shy about making biting judgments along the way… Higher education may be heading for a reckoning.” —The Wall Street Journal

“Andrew Hacker and Claudia Dreifus lay out the indictment of the nonprofit establishment in their eye-opening new book, Higher Education?” —The Washington Post

“The Bottom Line: Hacker and Dreifus offer one of the best critiques yet of what is wrong and right about college in America today.” —Businessweek

“A damning indictment of our colleges and universities you can't afford not to read. . . . Hacker and Dreifus have reignited the debate over what exactly we expect from a college degree.” —The Daily Beast

“Andrew Hacker and Claudia Dreifus have written a scathing populist attack on higher education that has something for everyone…[They] communicate in a clear, direct and lively manner.” —The New Republic

“Until now no one has deconstructed the entire college and university system from the Ivy League to TV-touted trade schools, which Andrew Hacker and Claudia Dreifus have just done in a new, brief volume that makes hamburger out of a herd of academia's sacred cows.” —Chicago Daily Observer

“American students are being neglected by celebrity professors, shortchanged by rising tuitions, and led astray by college football… [Higher Education? is] a fierce critique of modern academia.” —The Atlantic.com

“A wake-up call to alert both parents and students to the soaring cost of higher education in America and the steps that must be taken if it is become more accessible and affordable.” —Tucson Citizen

“Compelling… Hacker and Dreifus are determined to challenge conventional wisdom and shake up the educational establishment. Higher Education? has the great virtue of challenging the status quo complacency inside academia. They are right to put a question mark in the title of their book… Impressive.” —Tulsa World

“Ordinarily, I wouldn't expect any truly smart, beautifully researched, groundbreaking new book to eventually find its way into college reading lists. But Higher Education? may be the exception. It's a courageous indictment of our system of higher education itself -- with its outrageous costs and diminishing promise of a secure future for those who have the stamina to graduate. I am grateful to Andrew Hacker and Claudia Dreifus for daring to say what needs to be said.” —Barbara Ehrenreich, author of Nickel and Dimed and Bright-Sided

“Higher Education? is the most informative and readable book on the subject that I have ever read. Writing in a lively and engaging style, Andrew Hacker and Claudia Dreifus demystify a subject that is usually cloaked in academic jargon. Their analysis is sharp and their solutions to the problem of the escalating cost of higher education are sensible. I recommend this book to everyone who cares about the quality and accessibility of college education.” —Diane Ravitch, author of The Death and Life of the Great American School System

“Andrew Hacker and Claudia Dreifus are sure to stir a badly needed uproar in the world of higher education. They make their argument so gracefully, with so much mischievous delight and understated humor, and undergirded by so broad a base of data and compelling reportage, that even the most furious defenders of the status quo will not be able to ignore this book and the outrage it most certainly will stir.” —Jonathan Kozol, author of Savage Inequalities and Letters to a Young Teacher

“A timely and provocative book about a subject that affects all of us. Higher Education? is a thoroughly researched and welcome addition to the debate.” —Joseph E. Stiglitz, Nobel laureate in economics

“Higher Education? stands out with facts, figures, and probing analysis. Andrew Hacker and Claudia Dreifus clearly lay out why so many colleges and universities are helping to support a de facto American class system while failing their primary mission of preparing not only skilled labor but also producing educated, knowledgeable citizens who can play a role advancing our national life and strengthening our democracy. This is a thought-provoking book that I hope will generate serious national debate.” —Vartan Gregorian, president, Carnegie Corporation of New York

“Higher Education? raises piercing questions about how a respected sector of our society is failing our young people. Andrew Hacker and Claudia Dreifus unsparingly show where our colleges and universities have lost their principles and purpose. This book will spark a national debate that has been lacking, but is nonetheless essential.” —The Rev. Theodore M. Hesburgh, president emeritus, University of Notre Dame