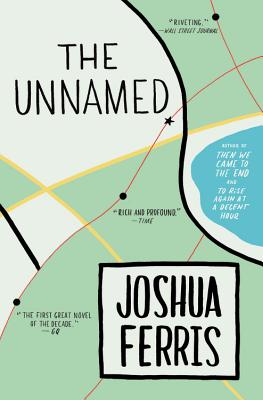 “Tim Farnsworth, a respected litigation attorney for a high-powered Manhattan law firm, is seized by a bizarre illness: He cannot stop walking. Whether taken as a form of mental or physical illness or read as an allegorical tale, The Unnamed is an absolutely heartbreaking story of love, marriage, family, and what it means to be successful in today's society.”
— Joni Montover, Paragraphs on Padre Boulevard, South Padre Island, TX

The Unnamed is a dazzling novel about a marriage, family, and the unseen forces of nature and desire that seem to threaten them both.

He was going to lose the house and everything in it.

The rare pleasure of a bath, the copper pots hanging above the kitchen island, his family-again he would lose his family. He stood inside the house and took stock. Everything in it had been taken for granted. How had that happened again? He had promised himself not to take anything for granted and now he couldn't recall the moment that promise had given way to the everyday.

Tim Farnsworth is a handsome, healthy man, aging with the grace of a matinee idol. His wife Jane still loves him, and for all its quiet trials, their marriage is still stronger than most. Despite long hours at the office, he remains passionate about his work, and his partnership at a prestigious Manhattan law firm means that the work he does is important. And, even as his daughter Becka retreats behind her guitar, her dreadlocks and her puppy fat, he offers her every one of a father's honest lies about her being the most beautiful girl in the world.

He loves his wife, his family, his work, his home. He loves his kitchen. And then one day he stands up and walks out. And keeps walking.

The Unnamed is a heartbreaking story of a life taken for granted -- and what happens when that life is abruptly and irrevocably taken away.
Joshua Ferris's first novel, Then We Came to the End, has been translated into 24 languages. His fiction has appeared in the New Yorker, Granta, and Best American Voices. Ferris was chosen for the New Yorker's "20 Under 40" list of fiction writers in 2010. He lives in New York.
"Arresting, ground-shifting, beautiful and tragic. This is the book a new generation of writers will answer to. No one in America writes like this."—Gary Shteyngart, author of ABSURDISTAN and THE RUSSIAN DEBUTANTE'S HANDBOOK

"Heartfelt and delivered in solemn deadpan. It may even be, in its own modest way, a great American novel. "—Los Angeles Times

"Ferris imbues his story with a sense of foreboding, both for the physical world, in the grip of record-breaking temperatures, and for the vulnerable nuclear family and its slow unraveling. With its devastating metaphoric take on the yearning for connection and the struggles of commitment, Ferris brilliantly channels the suburban angst of Yates and Cheever for the new millennium."—Booklist, starred review

"Unfold[s] in a hushed, shadowed dimension located somewhere between myth and a David Mamet play."— Salon

"An unnerving portrait of a man stripped of civilization's defenses. Ferris's prose is brash, extravagant, and, near the end, chillingly beautiful."— The New Yorker

"Ferris puts his notable wit and observational ability aside in favor of a far more psychological (and ultimately physical) examination of the self. . . . an accomplished and daring work by a writer just now realizing what he is capable of creating."— The Los Angeles Times

"[Ferris is] a brilliant and funny observer."— The New York Times

"Ferris shows a talent for the grotesque in his riveting descriptions of Tim's decline. He also includes his specialty - scenes of juicy office intrigue. But what's most engrossing in his portrait of a couple locked in an extreme version of a familiar conflict - the desire to stay together versus an inexplicable yearning to walk away."— O Magazine

"You can't break away from the grip of these opening chapters . . . Ferris usually writes in a steady, cool voice whether delivering the quotidian details of office work or existential observations about God that would otherwise sound grandiose. The effect is a terrifying portrayal of intermittent mental illness, the way the fear of relapse becomes a kind of specter, mocking each recovery and shredding any hope of a cure."— The Washington Post

"Strange and beguiling . . . With this brave and masterful novel, Ferris has proven himself a writer of the first order. The Unnamed poses a question that could not be more relevant to the America of 2010: Will the compulsions of our bodies defeat the contents of our souls?"— The Boston Globe

"Where Then We Came to the End mined the minutiae of cubicle life for humor and pathos, this one goes straight for the heart(and the jugular), telling the story of a married father struggling with an inexplicable disease, and thelengths to which he'll go to maintain control of his life."— GQ

"At once riveting, horrifying and deeply sad, The Unnamed, like Tim's feet, moves with a propulsion all its own. This is fiction with the force of an avalanche, snowballing unstoppable until it finally comes to rest-when we come to the end, so to speak."— The San Francisco Chronicle

"There is beauty in Ferris' writing, even when charged with despair."—The Chicago Sun-Times

"Mr. Ferris is wise enough not to teach a lesson. Rather, he has teased ordinary circumstances into something extraordinary, which is exactly what we want our fiction writers to do."— The Economist

"The Unnamed is ambitious, intelligent, and even more complex than Ferris's debut novel, Then We Came to the End."— Christian Science Monitor

"Bracingly original . . . Surprisingly, almost tenderly, and despite his unrelenting refusal to churn out a predictable happy ending, [Ferris] turns The Unnamed into a most unorthodox love story about commitment and sacrifice."—The Miami Herald

"Ferris' distinctive writing style is serious but whimsical, philosophical with a touch of the absurd."—St. Petersburg Times