The Queen of Nothing (The Folk of the Air #3) (Hardcover) 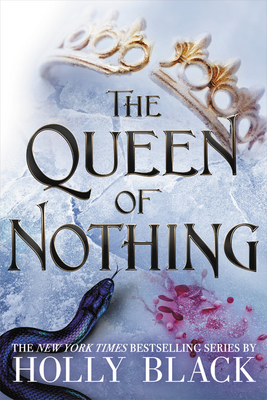 The Queen of Nothing (The Folk of the Air #3) (Hardcover)

“In The Queen of Nothing, Black continues the story of Jude and Carden that started with The Cruel Prince. Exile does not suit Jude and when the opportunity to return to Elfhame presents itself, she cannot say no, as the Faerie Court, her father, and Carden pull at her curiosity and heart. Black’s Faerie world is wonderfully constructed, and her storytelling skills shine. A rare series in which each new book enlarges, entwines, and enchants! Just flat-out fun to read.”
— Margaret Brennan Neville, The King's English Bookshop, Salt Lake City, UT

A powerful curse forces the exiled Queen of Faerie to choose between ambition and humanity in this highly anticipated and jaw-dropping finale to The Folk of the Air trilogy from a #1 New York Times bestselling author.

Power is much easier to acquire than it is to hold onto. Jude learned this lesson when she released her control over the wicked king, Cardan, in exchange for immeasurable power.

Now as the exiled mortal Queen of Faerie, Jude is powerless and left reeling from Cardan's betrayal. She bides her time determined to reclaim everything he took from her. Opportunity arrives in the form of her twin sister, Taryn, whose life is in peril.

Jude must risk venturing back into the treacherous Faerie Court, and confront her lingering feelings for Cardan, if she wishes to save her sister. But Elfhame is not as she left it. War is brewing. As Jude slips deep within enemy lines she becomes ensnared in the conflict's bloody politics.

And, when a dormant yet powerful curse is unleashed, panic spreads throughout the land, forcing her to choose between her ambition and her humanity . . .

Holly Black is the bestselling author of contemporary fantasy novels for teens and children, including The Folk of the Air trilogy, Tithe: A Modern Faerie Tale and the #1 New York Times bestselling Spiderwick series. She has been a finalist for the Eisner Award, and the recipient of the Andre Norton Award and Mythopoeic Award. Holly lives in Massachusetts with her husband, Theo, in a house with a secret library. Her website is www.blackholly.com.
Praise for The Queen of Nothing:
*"Whether you came for the lore or the love, perfection."
—Kirkus, starred review

*"A compelling final piece in a powerful set."—Booklist, starred review

"We're being promised a 'jaw-dropping' finale...Based on the ride she's taken readers on so far, we'd expect nothing less."—Entertainment Weekly

Praise for The Wicked King:
*"A stunning and compelling sequel."—--SLJ, starred Review

*"A heady blend of courtly double-crossing, Faerie lore, and toxic attraction swirls together in the sequel to THE CRUEL PRINCE.... Black's writing is both contemporary and classic; her world is, at this point, intensely well-realized, so that some plot twists seem almost inevitable."—Kirkus, starred Review

*"A rare second volume that surpasses the first, with, happily, more intrigue and passion still to come."—Booklist, Starred Review

Praise for The Cruel Prince:
"Lush, dangerous, a dark jewel of a book. Black's world is intoxicating, imbued with a relentless sense of peril that kept me riveted through every chapter of Jude's journey. And Jude! She is a heroine to love--brave but pragmatic, utterly human. This delicious story will seduce you and leave you desperate for just one more page."—Leigh Bardugo, #1 New York Times bestselling author of Six of Crows and Crooked Kingdom

* "Another fantastic, deeply engaging, and all-consuming work from Black that belongs on all YA shelves."—School Library Journal, starred review

* "Jude, who struggles with a world she both loves and hates and would rather be powerful and safe than good, is a compelling narrator. Whatever a reader is looking for--heart-in-throat action, deadly romance, double-crossing, moral complexity--this is one heck of a ride."—Booklist, starred review

"This is a heady blend of Faerie lore, high fantasy, and high school drama, dripping with description that brings the dangerous but tempting world of Faerie to life. Black is building a complex mythology; now is a great time to tune in."—Kirkus Reviews