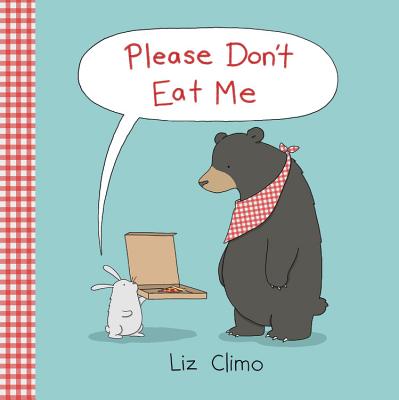 
On Our Shelves Now
Beloved author-illustrator Liz Climo is back with a hilarious take on (reluctant) friendship that will appeal to fans of We Don't Eat Our Classmates and I Want My Hat Back!
When a carefree bunny is approached by a voracious bear in the woods, Bunny has just one request: "Please don't eat me."

But the bear has a never-ending list of requests, and Bunny realizes maybe Bear isn't as hungry as he'd let on...maybe he just wants his new friend's company for a while.

This witty and poignant exploration of predator and prey will have children and parents alike roaring with laughter--and looking for their next meal.
Liz Climo grew up in the San Francisco Bay Area and moved to Los Angeles after college to work as a character artist on The Simpsons. She is the illustrator of You Don't Want a Unicorn and Can Somebody Please Scratch My Back?, as well as the author and illustrator of the Rory the Dinosaur series, The Little World of Liz Climo, Lobster is the Best Medicine, and Best Bear Ever!. Liz currently lives with her husband and their daughter. She would never eat a friend, but always says yes to splitting a pizza. You can see more of her work at lizclimo.tumblr.com.

"Hand to fans of [Laura] Numeroff's many books or read this for a raucous and silly preschool storytime."—School Library Journal

* "Echoes of child persistence and adult exasperation might ring familiar to grownup readers, but mostly this will earn plenty of giggles from fans of Jon Klassen and Lemony Snicket."—BCCB, starred review

"[...] Climo's laconic repartee between predator and prey is aimed pretty squarely at a 4-year-old's funny bone. The sarcastic rabbit and the sincere, if sincerely peckish, bear make an entertaining duo."—The Washington Post

Praise for Rory the Dinosaur Wants a Pet:"The cartoon-style illustrations, achieved with "digital magic," are set off with plenty of white space, and...it is an appealing read-aloud. Children just developing a sense of humor will appreciate the innocent silliness of the tale."—Kirkus Reviews

Praise for You Don't Want a Unicorn!: "Climo's rainbow-bright illustrations take Dyckman's silly premise to a whole new level of absurdity.... This is a crowd-pleaser, complete with cupcake poops and rainbow burps, and...a welcoming and unobtrusive gender-nonconforming vibe."—Horn Book