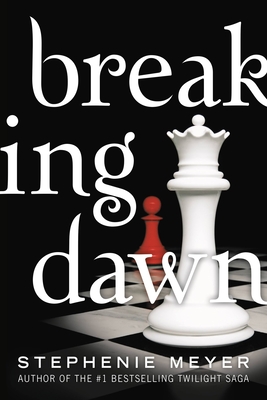 In the explosive finale to the epic romantic saga, Bella has one final choice to make. Should she stay mortal and strengthen her connection to the werewolves, or leave it all behind to become a vampire? When you loved the one who was killing you, it left you no options. How could you run, how could you fight, when doing so would hurt that beloved one? If your life was all you had to give, how could you not give it? If it was someone you truly loved? To be irrevocably in love with a vampire is both fantasy and nightmare woven into a dangerously heightened reality for Bella Swan. Pulled in one direction by her intense passion for Edward Cullen, and in another by her profound connection to werewolf Jacob Black, a tumultuous year of temptation, loss, and strife have led her to the ultimate turning point. Her imminent choice to either join the dark but seductive world of immortals or to pursue a fully human life has become the thread from which the fates of two tribes hangs. This astonishing, breathlessly anticipated conclusion to the Twilight Saga illuminates the secrets and mysteries of this spellbinding romantic epic. It's here! #1 bestselling author Stephenie Meyer makes a triumphant return to the world of Twilight with the highly anticipated companion, Midnight Sun: the iconic love story of Bella and Edward told from the vampire's point of view. "People do not want to just read Meyer's books; they want to climb inside them and live there." -- Time "A literary phenomenon." -- The New York Times
Stephenie Meyer is the author of the #1 bestselling Twilight Saga, The Host, and The Chemist. Twilight has enraptured millions of readers since its publication in 2005 and has become a modern classic, redefining genres within young adult literature and inspiring a phenomenon that has had readers yearning for more. The series has sold 160 million copies worldwide and was made into five blockbuster feature films. Stephenie lives in Arizona with her husband. Her website is stepheniemeyer.com.
Praise for TWILIGHT:
A New York Times Editor's Choice
A Publishers Weekly Best Book of the Year
An Amazon Best Book of the Decade
An American Library Association Top Ten Best Books for Young Adults