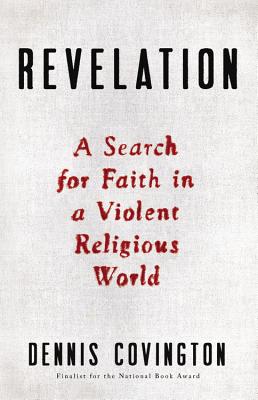 In war zones witnessing widespread conflict, what makes life at all worth living? When chaos becomes a way of life in places where religion and violence intersect, what do people hold on to? If religious belief is, as Christopher Hitchens argues, the cause of wars and genocide, then is faith the cure?

Dennis Covington pursued answers to these questions for years, traveling deep into places like Syria, Mexico, and the American South. Looking not for rigid doctrines, creeds, or beliefs -- which, he says, can be contradictory, even dangerous -- he sought something bigger and more fundamental: faith. It's faith in goodness, kindness, and the humanity of the smallest moments that makes the most difficult times bearable.

The young bomb victim who offers a smile from his hospital bed, the grieving parent who shares a photograph, the joined hands of men who were previously mortal enemies, and Covington's own family turmoil. These are some of the moments that leave him touching the beating heart of what it truly is to live.

Like Covington's widely celebrated Salvation on Sand Mountain, Revelation is an intensely personal journey that goes to the edges of a world filled with violence and religious strife to find the enduring worth of living.

Dennis Covington is the author of two novels and three nonfiction books. His book Salvation on Sand Mountain was a National Book Award finalist, and his articles have been published in the New York Times, Los Angeles Times Magazine, Lapham's Quarterly, Vogue, and many other periodicals. He was born in Birmingham, Alabama, and earned a BA from the University of Virginia and an MFA from the Iowa Writers' Workshop, where he studied under Raymond Carver. He currently teaches creative writing at Texas Tech University.

One of Spirituality & Health's Best Books of 2016

"Covington interweaves his personal stories into his accounts of travels to violent places, where he searches for signs of faith and hope. What he mostly finds, and describes vividly, is religious strife and brutality, with small moments of grace.—Sam Mowe, Spirituality and Health

"Once again, Dennis Covington, author of the astonishing Salvation on Sand Mountain, rushes headlong into abysses that the rest of us flee, from the most brutal spots on earth to the rawest truths in the mirror. His obsessed, haunted quest scours the depths of madness--his, ours, this century's--yet somehow salvages faith from the most fearful despair. This brave book is a Revelation, indeed."—Alan Weisman, author of Countdown and The World Without Us

"In his newest book, Dennis Covington addresses questions of doubt, faith, and belief with the same uncondescending and unflinching manner as in Salvation on Sand Mountain, but his scope is larger now, venturing into some of the world's most brutal places in a search for faith, and hope. Revelation is a marvel."—Ron Rash, author of Above the Waterfall

"Twenty years ago, Dennis Covington wrote a classic book about the intersection of faith and violence in America. Revelation is an equally riveting exploration on a global scale of the dangers and the possibilities of belief. With searing insight and powerful prose, this fearless and deeply personal examination of religion's dark side dares also to look for its light."—Peter Manseau, author of One Nation, Under Gods

"Dennis Covington goes to unimaginable lengths to answer a defining question of our time: Why is religious faith so often associated with horrendous violence? His search, chronicled in Revelation, is at once global in scope, painfully personal and revealing."—Alan Huffman, author of Here I Am: The Story of Tim Hetherington, War Photographer

"Dennis Covington empathetically inhabits the victims of violence he meets, and in a fleeting instant, finds the grace that sustains them and the despair that transcends them beyond our reckoning. Touched by his epistles, we are somehow encouraged, even when all we have is God."—Mark Richard, author of House of Prayer No. 2

"A deeply disturbing story about a deeply disturbed world, told with urgency and a disarming, self-effacing sense of gallows humor. Covington is a fearless writer who speaks to you as if he knows you, because in his heart he truly does. This is a fascinating journey, a riveting book, a harrowing pleasure. Here is one of our very best writers, one of the most honest and interesting human beings writing today."—Brad Watson, author of The Heaven of Mercury and Aliens in the Prime of Their Lives

"From the first sentence on, you understand that what Dennis Covington brings to the page is something raw, terrifying, brilliant, and necessary. Vivid, tense, and compelling, Covington's story bears brave and unflinching witness to one of the most threatening conflicts of our time."—Kim Barnes, author of In the Kingdom of Men

"My claim, as brassy as it is meet, is that Revelation by Dennis Covington is both the perfect complement to and the necessary antidote for Joseph Conrad's Heart of Darkness. While the latter asks us to acknowledge the horror in and around us, the former invites us, even in the midst of the morally horrifying, to embrace the "substance of things hoped for" (Hebrews 11:1). Mr. Covington has seen the horrific up close and first hand: from the racial violence of his hometown, to the political violence of America's "dirty" war in El Salvador, to the religious violence consuming the middle east to the domestic violence peculiar to families rent by lost love to--well, his has been a life often out of round and wobbling out groove, a life not frequently in league with what President Lincoln called "the better angels of our nature." Still, I deeply admire his clarity and fearlessness. This is a volume, as much an argument as a memoir in his willingness to risk much for the much he hopes for, delivered to us in prose noteworthy for its muscle, its unexpected lyricism, and its relentless honesty."—Lee K. Abbott, author of All Things, All at Once

"What comes through here and elsewhere in the book is the dark side of 'witnessing' people in extremity, a frisson that becomes addictive and that confers on the writer a sense of belonging to an elite: those who are willing to look at the dark heart of things."
—John Wilson, Chicago Tribune

"This moving and riveting first-person account will appeal to those interested in the Syrian conflict as well as readers who enjoy faith journeys such as those by Anne Lamott and Nadia Bolz-Weber."
—Library Journal (starred review)

"The faith [Covington] finds is not steady, historical, or some kind of inner light. It is a mode of life occurring at the front lines, where people suffer most--haunted, tormented, but always intensely alive."—Brook Wilensky-Lanford, New York Times Book Review

"These stories do not make for easy reading. They confirm that life's sacredness, whether expressed through organized religion or nonbelief, requires acts of tender mercy."