Salvage This World: A Novel (Hardcover) 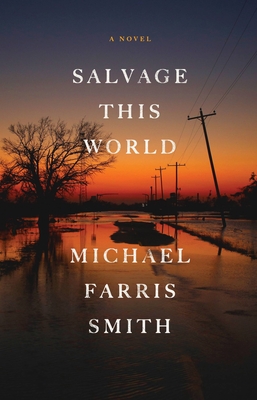 Salvage This World: A Novel (Hardcover)

In this gritty epic novel, a young woman returns home with her child to her ghost-haunted father, while a religious extremist hunts the stormridden territory to find the girl who may be a savior in the apocalypse.

In the hurricane-ravaged bottomlands of South Mississippi, where stores are closing and jobs are few, a fierce zealot has gained a foothold, capitalizing on the vulnerability of a dwindling population and a burning need for hope. As she preaches and promises salvation from the light of the pulpit, in the shadows she sows the seeds of violence.

Elsewhere, Jessie and her toddler, Jace, are on the run across the Mississippi/Louisiana line, in a resentful return to her childhood home and her desolate father. Holt, Jace's father, is missing and hunted by a brutish crowd, and an old man witnesses the wrong thing in the depths of night. In only a matter of days, all of their lives will collide, and be altered, in the maelstrom of the changing world.

At once elegiac and profound, SALVAGE THIS WORLD journeys into the heart of a region growing darker and less forgiving, and asks how we keep going—what do we hold onto—in a land where God has fled.
Michael Farris Smith is an award-winning writer whose novels have appeared on Best of the Year lists with Esquire, NPR, Southern Living, Garden & Gun, Book Riot, and numerous other outlets, and have been named Indie Next, Barnes & Noble Discover, and Amazon Best of the Month selections. He has also written the feature-film adaptations of his novels Desperation Road and The Fighter, titled for the screen as Rumble Through the Dark. He lives in Oxford, Mississippi, with his wife and daughters.
“With a cast of fierce, masterfully drawn characters set loose in gorgeous, hurricane-blasted landscapes, Salvage this World by Michael Farris Smith is riveting: I couldn't put it down.”—Laird Hunt, National Book Award-nominated author of ZORRIE and NEVERHOME

"Audaciously prophetic. Here’s a near-future and all too plausible southern noir in which the lawlessness already creeping into American democracy has become the norm and in which preachers have abandoned Christ and instead are searching for the new climate Messiah, and the line between good and evil is not only very thin but completely effaced.  A rollicking good (dark) read."—Brian Evenson, author of LAST DAYS

"Man, did I like this one. Southern, wet and gritty. Storm-filled and laced with fear and tension, as well as realistic and engaging characters, I found this world grimly enticing.”—Joe R. Lansdale, author of The Thicket and the Hap & Leonard Mysteries

"In this evocative noir of the Mississippi Delta... Smith perfectly depicts a landscape of dwindling resources and limited prospects, where crime turns out to be the most expedient solution. There’s plenty of human drama in this gritty literary thriller."—Publishers Weekly