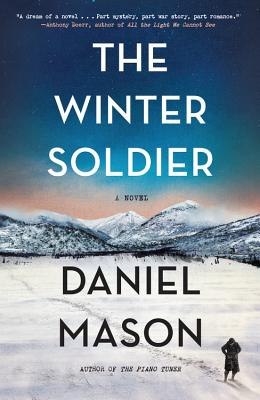 
Email or call for price.
The epic story of war and medicine from the award-winning author of The Piano Tuner is "a dream of a novel...part mystery, part war story, part romance" (Anthony Doerr, author of All the Light We Cannot See).

Vienna, 1914. Lucius is a twenty-two-year-old medical student when World War I explodes across Europe. Enraptured by romantic tales of battlefield surgery, he enlists, expecting a position at a well-organized field hospital. But when he arrives, at a commandeered church tucked away high in a remote valley of the Carpathian Mountains, he finds a freezing outpost ravaged by typhus. The other doctors have fled, and only a single, mysterious nurse named Sister Margarete remains.

But Lucius has never lifted a surgeon's scalpel. And as the war rages across the winter landscape, he finds himself falling in love with the woman from whom he must learn a brutal, makeshift medicine. Then one day, an unconscious soldier is brought in from the snow, his uniform stuffed with strange drawings. He seems beyond rescue, until Lucius makes a fateful decision that will change the lives of doctor, patient, and nurse forever.

From the gilded ballrooms of Imperial Vienna to the frozen forests of the Eastern Front; from hardscrabble operating rooms to battlefields thundering with Cossack cavalry, The Winter Soldier is the story of war and medicine, of family, of finding love in the sweeping tides of history, and finally, of the mistakes we make, and the precious opportunities to atone.

"The Winter Soldier brims with improbable narrative pleasures...These pages crackle with excitement... A spectacular success." —Anthony Marra, New York Times Book Review
Daniel Mason is the author of the collection A Registry of My Passage Upon the Earth, a finalist for the 2021 Pulitzer Prize and winner of the California Book Award, and three novels, including The Winter Soldier and The Piano Tuner.  His work has been translated into twenty-eight languages and awarded a Guggenheim fellowship, the Joyce Carol Oates Prize for Fiction, and a Fellowship from the National Endowment for the Arts.  He lives in the San Francisco Bay Area, where he is an assistant professor in the Stanford University Department of Psychiatry.
"The beauty of The Winter Soldier persists even through scenes of unspeakable agony. That tension reflects the span of Daniel Mason's talent. As a writer, he knows how to capture the grace of a moment; as a doctor, he knows how wrong things can go...The Winter Soldier draws us into the deadly undertow of history that swept away so many in the early twentieth century. The redemption the story ultimately offers is equally unlikely and gorgeous, painfully limited but gratefully received in a world thrown into chaos."—Ron Charles, Washington Post

"Not only does Mason make every crumb of pertinent history, culture, and geography so real throughout this saga that a reader feels instantly teleported into all of it but The Winter Soldier delivers, in shocking detail, a relentless inventory of the era's medical knowledge and practices...The novel's pacing clips along tightly; its closure, when at last it comes, proves deeply, memorably moving...One is reminded of a dozen greats: Doctor Zhivago, The English Patient, For Whom the Bell Tolls."—Joan Frank, San Francisco Chronicle

"The Winter Soldier held me by the throat from the first lyrical page to the last. A story which manages to be as original as it is timeless, and above all, credible."—Emma Donoghue, bestselling author of Room

"Timeless...The Winter Soldier brims with improbable narrative pleasures...Within the meticulously researched and magnificently realized backdrop of European dissolution, Mason finds his few lost souls, and shepherds them toward an elusive peace. Lucius's 'dream of being able to see another person's thinking' is not only the controlling metaphor of The Winter Soldier but the work of literature more broadly."—Anthony Marra, New York Times

"Captivating...Early passages describing the hospital, its various characters, and the education that Lucius receives there--both medical and romantic--are among the many marvels of The Winter Soldier...It does what all the best novels do: creates a world in which readers pleasurably lose themselves."—Tom Beer, Newsday

"This is a great war novel, plunging you into the chaos of conflict and the unexpected consequences of a love that begins amid that chaos."—Lynn Neary, NPR (Best Books of 2018)

"Can it be that this novel is too interesting? Too well constructed? Too filled with humanity, depth, arcane facts, and matters of life and death? Is it just too perfect a book? Everyone I have pushed to read this book says yes. Please judge for yourself if this isn't one of the most satisfying novels you have ever encountered."—Louise Erdrich, author of Future Home of the Living God and the National Book Critics Circle Award winner LaRose

"A uniquely compelling read...With a physician's precision and an artist's eye, author Daniel Mason captures the emotional and physical upheaval wrought by war. Right from the start, the novel thrums with tension, whisking the reader into the fray."—Melissa Brown, Bookpage

"I have been a Daniel Mason fan since The Piano Tuner. His abilities as a storyteller and a writer of the most gorgeous prose leave you wanting more. The Winter Soldier is a tour de force."—Abraham Verghese, bestselling author of Cutting for Stone

"Most remarkable about Mason's fiction is the quality of his revelations, his ability to unveil temperaments, habits, natures...Margarete is the heart of the book, a gloriously real creation...What unfolds is a kind of parable of what it means to sit with suffering, to charm it, to bear it, the novel performing the limits of a doctor's cure."—Wyatt Mason, New York Times Magazine

"So real, so rich and detailed, that the room in which I was reading vanished. I was transported to a lost world of the past. Suspenseful, thrilling, aching with emotion. Living with Lucius and Margarete--it was the First World War as I have never felt it."—Andrew Sean Greer, Pulitzer Prize-winning author of Less

"A remarkable example of how a skilled writer can turn a dusty premise into a story bursting with vivid life...Mason's prose, however, flows like clear water, leaving us moved by these star-crossed lovers, and by the soldiers 'who seemed forever stuck in their eternal winters.'"—Moira Macdonald, Seattle Times

"In the tradition of Cold Mountain and Doctor Zhivago, Daniel Mason's new novel is a gloriously gripping story of love, war, and the marvel of human endurance. Sweeping yet intimate, brutal yet tender, it kept me up, it broke my heart, and it made me remember yet again just how a good book--a really good book--rekindles our love of life."—Julia Glass, National Book Award-winning author of Three Junes and A House Among the Trees

"In Mason's powerful tale of individuals caught up in world-changing events, Lucius's search for his lost love also becomes a journey towards some kind of redemption from the horrors he has witnessed."—Sunday Times (London)

"One of the most beautifully written examples of historical fiction I've ever read: the details, the authenticity, and the clarity are remarkable. Every image is jaw-droppingly vivid...I was reminded, in all the best ways, of The English Patient and Doctor Zhivago."—Chris Bohjalian, author of The Flight Attendant

"Breathtaking and evocative...The Winter Soldier weaves a spellbinding story that draws you into another world from the very first page...Few stories handle the human cost of war as delicately and perceptively...Read it. It's a bravura performance."—Poornima Apte, Bookbrowse

"In The Winter Soldier, Daniel Mason achieves a deeply affecting balancing act, drawing us into the crushing agony of war while simultaneously stirring our hearts with an inspired and touching love story."—Georgia Hunter, bestselling author of We Were the Lucky Ones

"Utterly convincing and written with a lyricism that belies the horrors it so unflinchingly describes, this is both a moving love story and a profound portrayal of war's physical and psychological effects on survivors."—Mail on Sunday (UK)

"A sweeping story of love found and lost, steeped in medical details that reveal the full horrors that ill-equipped doctors and nurses faced over years of vicious trench warfare, The Winter Soldier is a vivid account of one man caught up in the epic forces of war, who desperately fights against the tides of change in search of redemption."—Booklist

"Enthralled by the setting, the characters, and the language, I was held captive by this remarkable historical novel."—Mark Sullivan, bestselling author of Beneath a Scarlet Sky

"A moving historical novel...Mason's old-fashioned novel delivers a sweeping yet intimate account of WWI, and in Lucius, the author has created an outstanding protagonist."—Publishers Weekly

"The Winter Soldier is beautifully, elegantly written, Mason's prose pitched at a level where it feels rich and lustrous but at the same time transparent and devoid of pomposity. Constantly carrying the reader forward, it's a novel to get lost in, one you can look up from and find that hours have passed."—Alastair Mabbott, The Herald (Scotland)

"Daniel Mason, a forty-two-year-old practicing psychiatrist, has quietly emerged as one of the finest prose stylists in American fiction--bringing a clinician's mind to the construction of interior worlds."—New York Times Magazine