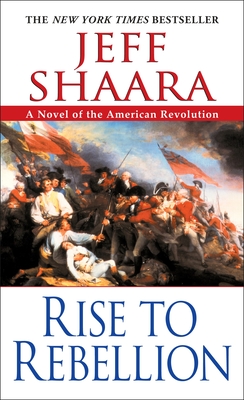 This is book number 1 in the The American Revolutionary War series.

Jeff Shaara dazzled readers with his bestselling novels Gods and Generals, The Last Full Measure, and Gone for Soldiers. Now the acclaimed author who illuminated the Civil War and the Mexican-American War brilliantly brings to life the American Revolution, creating a superb saga of the men who helped to forge the destiny of a nation.
Jeff Shaara is the New York Times bestselling author of A Chain of Thunder, A Blaze of Glory, The Final Storm, No Less Than Victory, The Steel Wave, The Rising Tide, To the Last Man, The Glorious Cause, Rise to Rebellion, and Gone for Soldiers, as well as Gods and Generals and The Last Full Measure—two novels that complete the Civil War trilogy that began with his father’s Pulitzer Prize–winning classic, The Killer Angels. Shaara was born into a family of Italian immigrants in New Brunswick, New Jersey. He grew up in Tallahassee, Florida, and graduated from Florida State University. He lives again in Tallahassee.
“A ROUSING NOVEL RECOUNTING THE EVENTS THAT LED TO THE DECLARATION OF INDEPENDENCE.”
–The Washington Times

“Dazzling . . . All the drama of a revolution is brought to light in Rise to Rebellion. . . . A stellar endeavor, it’s an unforgettable saga about special men and women who helped forge the destiny of a nation.”
–Rocky Mountain News

“THIS MAY BE [SHAARA’S] BEST BOOK YET. . . . A HIGHLY READABLE TALE, HISTORY DISGUISED AS ENTERTAINMENT.”
–Seattle Times/Post Intelligencer