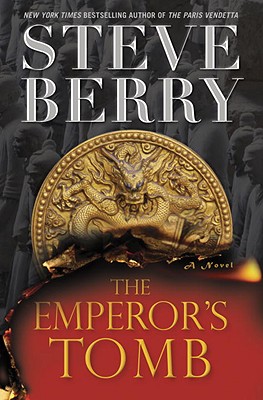 The tomb of China’s First Emperor, guarded by an underground army of terra-cotta warriors, has remained sealed for more than 2,000 years. Though it’s regarded as one of the greatest archaeological sites in the world, the Chinese government won’t allow anyone to open it. Why?

That question is at the heart of a dilemma faced by former Justice Department operative Cotton Malone, whose life is shattered when he receives an anonymous note carrying an unfamiliar Web address. Logging on, he sees Cassiopeia Vitt, a woman who’s saved his life more than once, being tortured at the hands of a mysterious man who has a single demand: Bring me the artifact she’s asked you to keep safe. The only problem is, Malone doesn’t have a clue what the man is talking about, since Cassiopeia has left nothing with him. So begins Malone’s most harrowing adventure to date—one that offers up astounding historical revelations, pits him against a ruthless ancient brotherhood, and sends him from Denmark to Belgium to Vietnam then on to China, a vast and mysterious land where danger lurks at every turn.

Steve Berry is the "New York Times" and #1 internationally bestselling author of "The King's Deception, The Columbus Affair, The Jefferson Key, The Emperor's Tomb, The Paris Vendetta, The Charlemagne Pursuit, The Venetian Betrayal, The Alexandria Link, The Templar Legacy, The Third Secret, The Romanov Prophecy, "and" The Amber Room." His books have been translated into 40 languages with more than 15,000,000 printed copies in 51 countries.

History lies at the heart of every Steve Berry novel. It's this passion, one he shares with his wife, Elizabeth, that led them to create History Matters, a foundation dedicated to historic preservation. Since 2009 Steve and Elizabeth have traveled across the country to save endangered historic treasures, raising money via lectures, receptions, galas, luncheons, dinners, and their popular writers' workshops. To date, nearly 2,000 students have attended those workshops. In 2012 their work was recognized by the American Library Association, which named Steve the first spokesman for National Preservation Week. He was also appointed by the Smithsonian Board of Regents to serve on the Smithsonian Libraries Advisory Board to help promote and support the libraries in their mission to provide information in all forms to scientists, curators, scholars, students and the public at large. He has received the Royden B. Davis Distinguished Author Award and the 2013 Writers for Writers Award from "Poets & Writers." His novel "The Columbus Affair" earned him the Anne Frank Human Writes Award, and his historic preservation work merited the 2013 Silver Bullet from International Thriller Writers.

Steve Berry was born and raised in Georgia, graduating from the Walter F. George School of Law at Mercer University. He was a trial lawyer for 30 years and held elective office for 14 of those years. He is a founding member of International Thriller Writers--a group of more than 2,000 thriller writers from around the world--and served three years as its co-president.

Praise for the novels of Steve Berry

“Steve Berry gets better and better with each new book.”—The Huffington Post, on The Paris Vendetta

“[An] amazing blend of suspense and history . . . [Readers] cannot go wrong with Cotton Malone.”—Library Journal, on The Charlemagne Pursuit