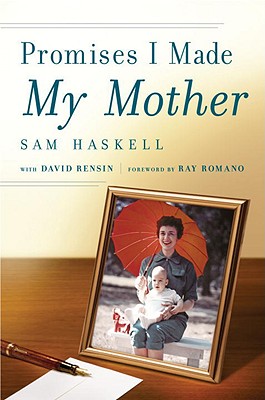 What would my mother say? How would she want me to handle this situation? How can I make this tough decision and stay true to myself?
What would my mother say?
Sam Haskell still asks himself these questions every day.
When Haskell was young, his devoted mother, Mary, instilled in her son the values of character, faith, and honor by setting an example and asking him to promise to live his life according to her lessons. He did, and those promises have served Haskell consistently from his Mississippi boyhood to his long career at the venerable William Morris Agency in Beverly Hills.
In this inspiring memoir full of touching stories and amusing anecdotes, Haskell reveals how he kept his pledge to his mother to live a decent life even in the shark-infested waters of Hollywood, where he handled the hottest stars and packaged the highest-rated shows by refusing to become the cliche of an amoral agent. Here is Haskell as a child in Amory, Mississippi (pop. 7,000), discovering the power of hope as he waits for an unlikely visit from the Cheer Man (a representative of the detergent company who gave ten dollars to anyone using the brand), learning humility after pursuing an eighth-grade Good Citizenship award he cockily assumed he d win, confronting the complications of human character when a near-fatal car crash exposed his judgmental father's true nature.
Years later, in Hollywood, Haskell would rely on his mother's teachings honesty, self-reliance, and belief in God as he swiftly rose from the William Morris mailroom to eventually become the company's Worldwide Head of Television. His capacity for friendship and his insistence on living his version of the Golden Rule (being thoughtfully political ) allowed him to handle various client crises and the tense negotiations that nearly scuttled the last years of Everybody Loves Raymond and the entire existence of The Fresh Prince of Bel-Air.
Haskell has achieved success through self-respect, and from his story we learn how we, too, can maintain our dignity when faced with life's challenges. This stirring memoir is a testament to mothers everywhere who instill in their sons the lasting values they need to become good men and devoted fathers.

Sam Haskell moved from Mississippi to Los Angeles in 1978 to work at the William Morris Agency. He became an agent in 1980, senior vice president by 1990, executive vice president by 1995, and Worldwide Head of Television by 1999. After a twenty-six-year career, he retired in 2004 to pursue philanthropic endeavors. In 2007 he was named one of the 25 Most Innovative and Influential People in Television over the last quarter century by TV Week. He lives in Los Angeles with his wife, Mary Donnelly Haskell (his college sweetheart and a former Miss Mississippi), and their two children, Sam IV and Mary Lane. David Rensin has written or co-written thirteen books, five of them New York Times bestsellers. His most recent titles are All for a Few Perfect Waves: The Audacious Life and Legend of Rebel Surfer Miki Dora and The Mailroom: Hollywood History from the Bottom Up.

“My friend Sam Haskell’s journey has taken him from rural Mississippi to the great cities of the world—including The White House and Buckingham Palace. This book will tell you exactly how he did it. He had an inspirational mother who taught him life’s lessons!”—Morgan Freeman

“My friend Sam Haskell’s Promises I Made My Mother is a portrait of character—something mothers and sons should read together while celebrating one of the greatest bonds that exist in the world today!”—Lily Tomlin

“Sam Haskell is an anomaly in Hollywood. He brings to this book his humor, his honor and his unique perspective on how to live life. He is a great friend.”—Leslie Moonves, President and Chief Executive Officer, CBS

“I’ve always wondered how Sam Haskell survived in Hollywood, a viper’s nest that would make any asp jealous! Sam always treated everyone with respect and behaved with honor. Now having read Promises I Made My Mother, I understand that Sam found success by being true to himself and keeping his promises to his mother. It’s all in the breeding, and for you, it’s all in the reading!”—Doris Roberts, actress, Everybody Loves Raymond

“My friend Sam Haskell has revealed aspects of his life that even I didn’t know…Promises I Made My Mother is an eye opening read for anyone who has the capacity to dream.”—Dolly Parton

“It has been over 30 years since I signed on as Sam’s first client right out of the mail room at the William Morris Agency. He has kept his promises to his beloved mother and to all the rest of us who owe him so much. This book is a must read for anyone who hopes to find ‘true’ success in any field…the kind that lasts forever.”—Kathie Lee Gifford