Paul Ricoeur's Philosophical Anthropology as Hermeneutics of Liberation: Freedom, Justice, and the Power of Imagination (Paperback) 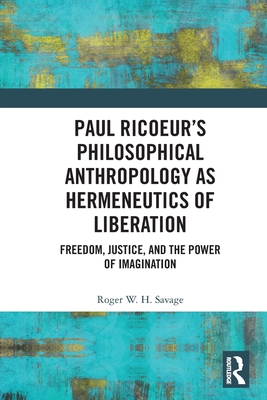 Paul Ricoeur's Philosophical Anthropology as Hermeneutics of Liberation: Freedom, Justice, and the Power of Imagination (Paperback)

This book offers a unique account of the role imagination plays in advancing the course of freedom's actualization. It draws on Paul Ricoeur's philosophical anthropology of the capable human being as the staging ground for an extended inquiry into the challenges of making freedom a reality within the history of humankind.

This book locates the abilities we exercise as capable human beings at the heart of a sustained analysis and reflection on the place of the idea of justice in a hermeneutics for which every expectation regarding rights, liberties, and opportunities must be a hope for humanity as a whole. The vision of a reconciled humanity that for Ricoeur figures in a philosophy of the will provides an initial touchstone for a hermeneutics of liberation rooted in a philosophical anthropology for which the path tique of human misery is its non- or pre-philosophical source. By setting the idea of the humanity in each of us against the backdrop of the necessity of preserving the tension between the space of our experiences and the horizons of our expectations, the book identifies the ethical and political dimensions of the idea of justice's federating force with the imperative of respect.

Paul Ricoeur's Philosophical Anthropology as Hermeneutics of Liberation will be of interest to scholars and advanced students working in hermeneutics, phenomenology, ethics, political theory, and aesthetics.

Roger W. H. Savage is a professor at the University of California, Los Angeles, specializing in hermeneutics, aesthetics, and politics. He is the author of Hermeneutics and Music Criticism and Music, Time, and Its Other: Aesthetic Reflections on Finitude, Temporality, and Alterity. He has also edited two books on the work of Paul Ricoeur: Paul Ricoeur in the Age of Hermeneutical Reason: Poetics, Praxis, and Critique and Paul Ricoeur and the Lived Body.