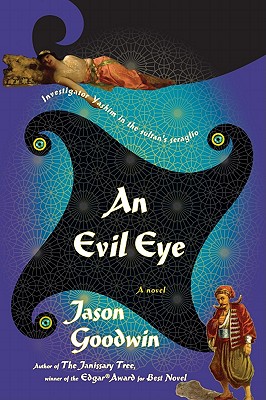 By Jason Goodwin
Special Order -- Email or Call for Availability

From the Edgar® Award–winning author of The Janissary Tree comes the fourth and most captivating Investigator Yashim mystery yet! It takes a writer of prodigious talents to conjure the Istanbul of the Ottoman Empire in all its
majesty. In three previous novels, Jason Goodwin has taken us on stylish, suspenseful, and vibrant excursions into its exotic territory. Now, in An Evil Eye, the mystery of Istanbul runs deeper than ever before. It’s 1839, and the admiral of the Ottoman fleet has defected to the Egyptians. It’s up to the intrepid Investigator Yashim to uncover the man’s motives. Of course, Fevzi Ahmet is no stranger to Yashim—it was Fevzi who taught the investigator his craft years ago. He’s the only man whom Yashim has ever truly feared: ruthless, cruel, and unswervingly loyal to the sultan. So what could have led Yashim’s former mentor to betray the Ottoman Empire? Yashim’s search draws him into the sultan’s seraglio, a well-appointed world with an undercurrent of fear, ambition, and deep-seated superstition. When the women of the sultan’s orchestra begin inexplicably to grow ill and die, Yashim discovers that the admiral’s defection may be rooted somewhere in the torturous strictures of the sultan’s harem. No one knows more about the Ottoman Empire and Istanbul than Jason Goodwin, of whom Janet
Maslin wrote in The New York Times: “Mr. Goodwin uses rich historical detail to elevate the books in this series . . . far above the realm of everyday sleuthing.”

Jason Goodwin is the bestselling author of "The Janissary Tree," "The Snake Stone," and "The Bellini Card," the first three books in his series of novels featuring Yashim. Goodwin studied Byzantine history at Cambridge and is the author of "Lords of the Horizons: A History of the Ottoman Empire," among other award-winning nonfiction. He lives with his wife and their four children in England.

“When you read a historical mystery by Jason Goodwin, you take a magic carpet ride to the most exotic place on earth.” —Marilyn Stasio, The New York Times Book Review