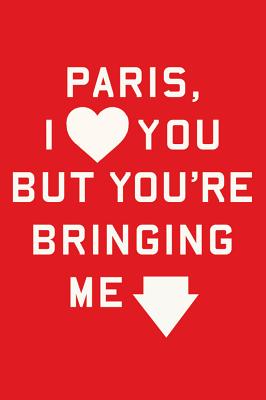 By Rosecrans Baldwin
$26.00
Email or call for price.

A self-described Francophile from when he was little, Rosecrans Baldwin always dreamed of living in Paris drinking le cafe, eating les croissants, walking in les jardins so when an opportunity presented itself to work for an advertising agency in Paris, he couldn't turn it down. Despite the fact that he had no experience in advertising. And despite the fact that he barely spoke French. After an unimaginable amount of red tape and bureaucracy, Rosecrans and his wife packed up their Brooklyn apartment and left the Big Apple for the City of Light. But when they arrived, things were not eactly what Rosecrans remembered from a family vacation when he was nine years old.

"Paris, I Love You but You're Bringing Me Down "is a nimble comic account of observing the French capital from the inside out. It is an exploration of the Paris of Sarkozy, text-message romances, smoking bans, and a McDonald's beneath the Louvre the story of an American who arrives loving Paris all out of proportion, but finds life there to be completely unlike what he expected. Over eighteen months, Rosecrans must rely on his dogged American optimism to get him through some very unromantic situations at work (writing booklets on how to breast-feed, raise, and nurture children), at home (trying to finish writing his first novel in an apartment surrounded on all sides by construction workers), and at every confusing French dinner party in between. An offbeat update to the expat canon, "Paris, I Love You "is a book about a young man finding his preconceptions replaced by the oddities of a vigorous, nervy city which is just what he needs to fall in love with Paris for the second time.

Rosecrans Baldwin's first novel, "You Lost Me There," was named one of NPR's Best Books of 2010, a "New York Times Book Review "Editors' Choice, and a "Time "and "Entertainment Weekly "Best Book of Summer 2010. He is a cofounder of the online magazine The Morning News.

“A charming entry into the expat canon, this book is Baldwin’s true story of moving to his favorite city in the world — favorite to the tune of obsession, mind you — and realizing it’s not quite as he had imagined.”—Emily Temple, Flavorwire

Baldwin proves that with the right attitude, everything in this perhaps most magically remembered of all cities is either beautiful, hilarious, or both, and his friendly voice and approachable style will grab those who want to be there and those who have never been.” — Annie Bostrom, Booklist

Paris, I Love You but You're Bringing Me Down is a charming, hilarious, keenly-observed and surprisingly poignant journey into the Parisian state of mind. I read it late at night and kept waking up my wife because I was laughing out loud.” —Anthony Doerr, author of Memory Wall and Four Seasons in Rome