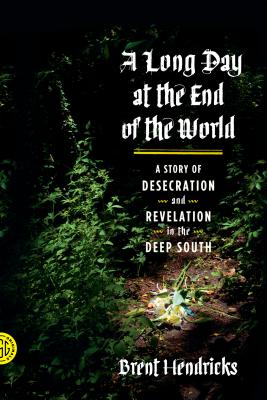 A chilling memoir of the Tri-State Crematory incident

In February 2002, hundreds of abandoned and decayed bodies were discovered at the Tri-State Crematory in rural Georgia, making it the largest mass desecration in modern American history. The perpetrator—a well-respected family man and a former hometown football star—had managed to conceal the horror for five years.

Among the bodies found at the Tri-State Crematory was that of Brent Hendricks's father. To quell the psychic disturbance surrounding the desecration, Hendricks embarked on a pilgrimage to the crematory site in Georgia. In A Long Day at the End of the World, he reveals his very complicated relationship with the South as he tries to reconcile his love-hate feelings for the culture with his own personal and familial history there, and his fascination with the disturbed landscape. In achingly beautiful prose, Hendricks explores his fraught relationship with his father—not just the grief that surrounded his death but the uncanniness of his resurrection.

It's a story that's so heart-wrenching, so unbelievable, and so sensational that it would be easy to tell it without delving deep. But Hendricks's inquiry is unrelenting, and he probes the extremely difficult questions about the love between a parent and a child, about the way human beings treat each other—in life and in death—and about the sanctity of the body. It's the perfect storm for a true Southern Gothic tale.

Brent Hendricks is a graduate of the University of Virginia, Harvard Law School, and the MFA program at the University of Arizona. He is the author of a book of poems, Thaumatrope, and has been published in such places as Poetry, Ploughshares, The Iowa Review, Conjunctions, The Southern Review, and Bomb magazine. He lives in Tucson, Arizona.

“When Brent Hendricks' book came across my desk, I was attracted to the elegiac cover design. When I discovered it was about the Tri-State Crematory scandal, my interest grew. But when I read Hendricks' gorgeous prose, I was floored.” —Suzanne Van Atten, The Atlanta Journal-Constitution

“Astonishing and unclassifiable, personal and apocalyptical, mystical and mythical, this little book, beautifully written and explosively patterned, sets out to fathom the unfathomable and, uncannily, pretty much succeeds in doing so.” —Joy Williams, author of The Quick and the Dead

“Training one eye on poetry and the other on the apocalypse, Brent Hendricks has written a book I can't stop thinking about. What a beautiful and uncanny accomplishment it is, and how well and unexpectedly its pieces fit together: at once the recreation of a crime and its aftermath, a meditation on the way a landscape can have its meanings shattered by circumstance, and the memoir of a son whose bond with his father remains as troubled in death as it was in life.” —Kevin Brockmeier, author of The Illumination and The Brief History of the Dead

“There is one thing you must know: the place where Brent Hendricks and I grew up was a land of ghosts, ghosts of an unspeakable past that was everywhere communicated by a flick of the hand, a turn of the eye, or a casual phrase. It was a place we learned to love and to hate, to defend and to fear, to celebrate and to deny. A Long Day at the End of the World is a note-perfect evocation of this strange haunted nature of the South. It's a stellar debut.” —Peter L. Buck of R.E.M.

“Hendricks skillfully interweaves the true-crime shocks of the Ed Gein–like scene with thoughtful asides on everything from Southern Baptists to Hernando de Soto to alchemy. A unique and affecting wander through some unwelcoming places.” —Daniel Kraus, Booklist

“Sharing many of the same qualities that made his first book of poems, Thaumatrope, a fascinating conceptual and narrative success, Hendricks's excellent nonfiction debut combines personal and psychological reflections to understand the largest mass desecration in modern American history.” —Publishers Weekly