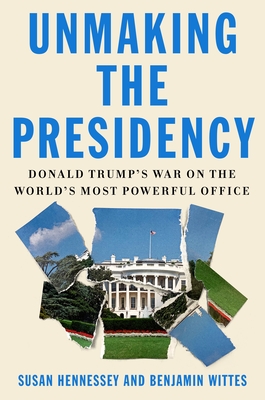 "This is a book for everyone who has developed an unexpected nostalgia for political 'norms' during the Trump years . . . Other books on the Trump White House expertly detail the mayhem inside; this book builds on those works to detail its consequences." —Carlos Lozada (one of twelve books to read "to understand what's going on")

"Perhaps the most penetrating book to have been written about Trump in office." —Lawrence Douglas, The Times Literary Supplement

The extraordinary authority of the U.S. presidency has no parallel in the democratic world. Today that authority resides in the hands of one man, Donald J. Trump. But rarely if ever has the nature of a president clashed more profoundly with the nature of the office. Unmaking the Presidency tells the story of the confrontation between a person and the institution he almost wholly embodies.

From the moment of his inauguration, Trump has challenged our deepest expectations of the presidency. But what are those expectations, where did they come from, and how great is the damage? As editors of the “invaluable” (The New York Times) Lawfare website, Susan Hennessey and Benjamin Wittes have attracted a large audience to their hard-hitting and highly informed commentary on the controversies surrounding the Trump administration. In this book, they situate Trump-era scandals and outrages in the deeper context of the presidency itself. How should we understand the oath of office when it is taken by a man who may not know what it means to preserve, protect, and defend something other than himself? What aspects of Trump are radically different from past presidents and what aspects have historical antecedents? When has he simply built on his predecessors’ misdeeds, and when has he invented categories of misrule entirely his own?

By setting Trump in the light of history, Hennessey and Wittes provide a crucial and durable account of a presidency like no other.

Susan Hennessey is the executive editor and editor in chief of Lawfare. A senior fellow at the Brookings Institution and CNN contributor, she was previously an attorney at the National Security Agency.

With Benjamin Wittes, she is coauthor of Unmaking the Presidency: Donald Trump's War on the World's Most Powerful Office.

Benjamin Wittes is the editor in chief of Lawfare. He is senior fellow at the Brookings Institution and author of Law and the Long War and The Future of Violence, among other books.

“Unmaking the Presidency, by Susan Hennessey and Benjamin Wittes, isn’t just another compendium of insider gossip and bumbling treachery. The authors offer something more sobering, more analytical and, at this point, more revealing. Unmaking the Presidency situates Trump’s tenure in the history of the executive branch, and shows how he is remaking the office itself in his own image . . . The authors are earnest and methodical—and the case they make is scarier for it." —Jennifer Szalai, The New York Times Book Review

"Unmaking the Presidency does something different. It aims to place Trump in historical context, to position him correctly on the continuum of American presidents with regard to a range of important axes. . . [Hennessey and Wittes] treat us to a wide-ranging and fascinating collection of contextual history." —Preet Bharara, Air Mail

"The Trump book . . . [that] is the most devastating yet . . . What [Hennessey and Wittes] have done with Unmaking the Presidency is striking. Rarely is anything this sobering this hard to put down . . . What, the reader is forced to consider, would it mean for America if Trump’s view of the office as inesperable from his person—and personal interests—became a generally acceptable position for future candidates to embrace?" —Tabatha Southey, Maclean's

"Unmaking the Presidency [is] perhaps the most penetrating book to have been written about Trump in office." —Lawrence Douglas, The Times Literary Supplement

"This is a book for everyone who has developed an unexpected nostalgia for political 'norms' during the Trump years . . . Other books on the Trump White House expertly detail the mayhem inside; this book builds on those works to detail its consequences." —Carlos Lozada

"[Unmaking the Presidency] goes deeper by placing [Trump's] presidency in historical context and offering an insightful and sobering look at how Trump may change the office forever . . . When allies cannot rely on America’s word, we cannot build coalitions. As Hennessey and Wittes put it, 'The author of The Art of the Deal cannot make deals, for who would rely on his word in a negotiation?'” —Barbara McQuade, The Washington Post

“Susan Hennessey and Benjamin Wittes do something with Unmaking the Presidency that’s not done nearly enough. They put this presidency into the context of history, and in doing so help us understand that what made our country great bears little resemblance to the man in office and the destructive path he has set us on. It’s an important read now and for the future.” —Hillary Clinton

“Essential reading from two indispensable voices of our time.” —James Comey, former director of the Federal Bureau of Investigation and author of A Higher Loyalty

“This is by far the most insightful book written about the Trump presidency. Drawing impressively but accessibly on presidential history and theory, Hennessey and Wittes pinpoint Trump's fundamental threat: his conscious effort to substitute personal interests and whims for the institutional norms that have long restrained executive action and channeled it toward serving the national interest. The authors argue persuasively that what is at stake in the 2020 election is no less than the nature of the American presidency itself.” —Jack Goldsmith, Shattuck Professor at Harvard Law School and author of The Terror Presidency and In Hoffa's Shadow

“Susan Hennessey and Benjamin Wittes have written an important book. In Unmaking the Presidency, they dissect Donald Trump’s actions in office, attempt to put them in historical context, and point out places where they have no precedent. They feel that the traditional presidency, for all of its limitations and flaws, still requires a defense. Time is running out.” —Michael Hayden, former director of the Central Intelligence Agency and the National Security Agency and author of The Assault on Intelligence

“Brilliantly weaving together accounts of Donald Trump’s incompetence and corruption with the legal and political history of the American presidency, Susan Hennessey and Benjamin Wittes have produced an exquisitely written and meticulously thorough—indeed, definitive—analysis of the current president’s instinctual efforts to abusively transform his high office, a sacred public trust, into a device for vulgar and egocentric self-promotion and self-aggrandizement.” —George T. Conway III, of counsel at Wachtell, Lipton, Rosen & Katz

“Susan Hennessey and Benjamin Wittes provide a legal overview of the Trump presidency that is hard-hitting, precise, and remarkably informative—a must-read for anyone who wants to understand Trump’s assault on the rule of law.” —Preet Bharara, former US attorney for the Southern District of New York, author of Doing Justice, and host of the podcast Stay Tuned with Preet