The Sport of Kings: A Novel (Hardcover) 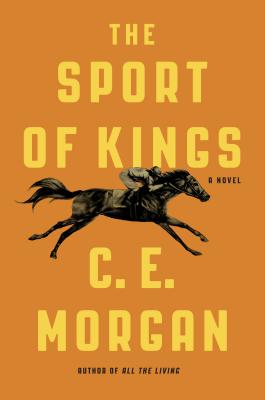 The Sport of Kings: A Novel (Hardcover)

“Horse racing and breeding, evolution, race, love, family dynamics, and America's historical past are a few of the subjects and issues that Morgan bravely, confidently, and intelligently explores with a poetic and lyrical sensibility. The result is a gorgeous and engaging novel that is sobering, important, and unforgettable. In addition to her singular vision and style, Morgan combines some of the intense power of the landscape-as-mindscape of Thomas Wolfe, the dramaturgy and myth-mining of Eugene O'Neill, the deep focus and rigor of Richard Powers, the transcendent beauty of Vollmann's best prose, and the strong spiritual commitment of Marilynne Robinson. The Sport of Kings unfolds dramatically into an exquisite work of classic American literature.”
— Ed Conklin (M), Chaucer's Books, Santa Barbara, CA

A Finalist for the Pulitzer Prize

"In its poetic splendor and moral seriousness, The Sport of Kings bears the traces of Faulkner, Morrison, and McCarthy. . . . It is a contemporary masterpiece."—San Francisco Chronicle

Hailed by The New Yorker for its “remarkable achievements,” The Sport of Kings is an American tale centered on a horse and two families: one white, a Southern dynasty whose forefathers were among the founders of Kentucky; the other African-American, the descendants of their slaves.

It is a dauntless narrative that stretches from the fields of the Virginia piedmont to the abundant pastures of the Bluegrass, and across the dark waters of the Ohio River; from the final shots of the Revolutionary War to the resounding clang of the starting bell at Churchill Downs. As C. E. Morgan unspools a fabric of shared histories, past and present converge in a Thoroughbred named Hellsmouth, heir to Secretariat and a contender for the Triple Crown. Newly confronted with one another in the quest for victory, the two families must face the consequences of their ambitions, as each is driven---and haunted---by the same, enduring question: How far away from your father can you run?

A sweeping narrative of wealth and poverty, racism and rage, The Sport of Kings is an unflinching portrait of lives cast in the shadow of slavery and a moral epic for our time.

C.E. Morgan studied English and voice at Berea College and holds a master’s in theological studies from Harvard Divinity School. She is the author of All the Living and lives in Kentucky.

“Remarkable achievements . . . The Sport of Kings hovers between fiction, history, and myth, its characters sometimes like the ancient ones bound to their tales by fate, its horses distant kin to those who drew the chariot of time across the sky . . . Novelists can do things that other writers can’t—and Morgan can do things that other novelists can’t . . . Tremendous, the work of a writer just starting to show us what she can do.” —Kathryn Shultz, The New Yorker

"Ravishing and ambitious . . . It’s a mud-flecked epic, replete with fertile symbolism, that hurtles through generations of Kentucky history . . . [Morgan is]an interior writer, with deep verbal and intellectual resources. . . Ms. Morgan bears down incisively on topics — the lust for speed and power and domination, the prison experience of black men, male camaraderie, the bonds between fathers and sons, the brute intricacies of the dirty Southern soul — that men have tended to claim . . . [A] serious and important novel.”—Dwight Garner, The New York Times

“Morgan’s storytelling abilities match her deep characterization — part of which is that she’s a writer of real virtuosity, and the narrative includes some of her set-piece 'lessons,' mock interviews, synthetic parables, and a retelling of the Eden myth in the style of Uncle Remus . . . Her concerns are Faulknerian in scope.” — Madison Smartt Bell, The Boston Globe

“One literary stereotype associates long, sprawling, ambitious novels with male writers . . . In this century, however, the finest 'major' novels have more often than not been written by women. Zadie Smith, Donna Tartt, Eleanor Catton, Meg Wolitzer and Elena Ferrante are among those hitting the long balls in contemporary fiction, and with The Sport of Kings, a world-encompassing colossus second novel, C. E. Morgan has joined their ranks . . . Morgan is a virtuoso stylist, easily rendering the kinetics of horseracing, then plunging beneath the surface to illuminate the mysteries of genetic science. There will not be a novel with a larger and more dazzlingly deployed vocabulary published this year.” —Michael LaPointe, The Times Literary Supplement

“Vivid epic of rage and racism on a Kentucky stud farm exposes the myth of the American dream.” —The Spectator (UK)

“With The Sport of Kings, C. E. Morgan has delivered a masterpiece. Rich, deep, and ambitious, this book is, by any standard, a Great American Novel.” —Philipp Meyer, author of The Son

“[The Sport of Kings] is an epic novel steeped in American history and geography . . . Morgan’s gothic tale of Southern decadence deepens into a searing investigation of racism’s enduring legacy . . . Vaultingly ambitious, thrillingly well-written, charged with moral fervor and rueful compassion. How will this dazzling writer astonish us next time?” —Kirkus Reviews (starred review)

“Morgan has dared to write the kind of book that was presumed long extinct: a high literary epic of America.” —Duncan White, The Telegraph (UK)

“[A] gorgeously textured novel ... Henrietta, possibly the most intellectually resplendent heroine I’ve met in a novel . . . C. E. Morgan has more nerve, linguistic vitality and commitment to cosmic thoroughness in one join of her little finger than the next hundred contemporary novelists have in their entire bodies and vocabularies . . . Nothing short of genius.” —Jaimy Gordon, The New York Times Book Review

“Sport of Kings boasts a plot that maintains tension and pace, and Morgan weaves its characters, its themes, its several histories together in a marvelous display of literary control and follow-through.” —Katherine A. Powers, Christian Science Monitor

“[A] rich and compulsive new novel . . . This book confirms [Morgan] as the new torchbearer of the Southern Gothic tradition . . . What emerges is a panoramic view of race relations in America, from the slow crumbling of the Jim Crow laws until shortly before the election of Barack Obama, with occasional glimpses into the more distant past. Racing provides the novel’s overarching metaphor for race (a set of tracks that determine the course of a life, and for which the correct breeding is essential), and Morgan’s white characters are hardly less constricted by history than her black ones. . . It’s a bleak and bitter inversion of the American dream — a world in which circumstances are impossible to change, and legacies impossible to shake.” —Edmund Gordon, The Financial Times

“A torchbearer for the new southern Gothic tradition.” —Financial Times

“The splendor and barbarism of horse racing and the legacy of slavery are just two of the threads in this sprawling, magisterial Southern Gothic for the 21st century.” —O, The Oprah Magazine