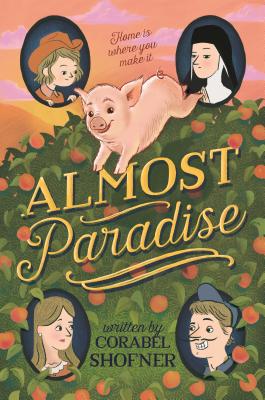 A heartfelt debut about a spunky girl determined to save her family and find her way home.

Twelve-year-old Ruby Clyde Henderson’s life changes the day her mother’s boyfriend holds up a convenience store, and her mother is wrongly jailed for assisting with the crime. Ruby and her pet pig, Bunny, find their way to her estranged Aunt Eleanor's home. Aunt Eleanor is an ornery nun who lives in the midst of a peach orchard on Paradise Ranch. With a little patience, she and Ruby begin to get along, but Eleanor has secrets of her own—secrets that might mean more hard times for Ruby.

It's not going to be easy for Ruby Clyde and Eleanor to heal old wounds, face the past, and learn to trust each other. But with enough little pieces of love, they might be able to bring their family together again, and learn that paradise isn't a place—it's the feeling of being home. Corabel Shofner's ALMOST PARADISE is a funny and heartfelt story of determination, belonging, and the joys of loving one another.

Corabel Shofner is a wife, mother, attorney, and author. She graduated from Columbia University with a degree in English literature and was on Law Review at Vanderbilt University School of Law. But before that she was a terrible student, seriously spacy, and wants all students to keep trying. Her shorter work has appeared in Willow Review, Word Riot, Habersham Review, Hawai’i Review, Sou’wester, South Carolina Review, South Dakota Review, and Xavier Review. Almost Paradise is her first novel.

“It’s not often that a book gets everything so right: characters, plot, setting, voice. It's even rarer to find all that in a first novel. But Shofner has taken all the established, important elements of a good middle-grade novel, given them a brisk shake, and served them up to readers in way that both entertains and enlighten . . . Though told in Ruby’s unique voice, the book nonetheless does fine by its adult characters, especially the dyspeptic Aunt Eleanor, who both teaches and is taught, and shows her fealty to duty in a surprising twist that will leave readers with plenty to chew on.” —Booklist, starred review

“One undersized but indomitable tomboy tackles tough issues with wry humor as she attempts to create the home and family for which she yearns . . . Idiosyncratic characters and plot twists and turns keep the story going, but it is Ruby's distinctive voice that shines in this debut novel and makes even the most far-fetched twist seem trustworthy. Ruby's folksy precociousness and determination are as endearing as her realization that the world is not perfect and that love comes in pieces. . . . a rollicking read.” —Kirkus Reviews

“Plucky and wise beyond her years, Ruby relies on hope and common sense in equal measure, and her voice is the star of Shofner’s debut novel . . . A quirky and ultimately uplifting tale, perfect for fans of Kate DiCamillo and Joan Bauer.” —School Library Journal

“What makes the story sing is our protagonist’s voice. She’s resilient, vulnerable, alert, honest, and hilarious, sharing her unique take on an unreliable world dotted with moments of joy and the kindness of strangers . . . On the stage of memorable middle-grade heroines, Ruby Clyde Henderson stands right beside DiCamillo’s India Opal Buloni.” —Horn Book