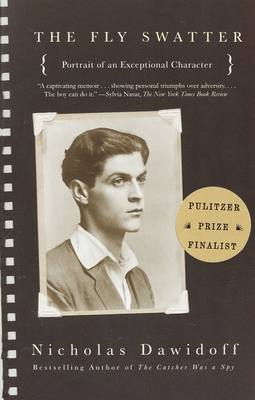 In The Fly Swatter, Nicholas Dawidoff--bestselling author of The Catcher Was a Spy--vividly reconstructs the life of his grandfather, Alexander Gerschenkron-the Harvard professor who knew the most.

A fascinating character, Gerschenkron feuded with Vladimir Nabokov and John Kenneth Galbraith, flirted with Marlene Dietrich, and played chess with Marcel Duchamp and one-upped both Isiah Berlin and (allegedly) Ted Williams. At Harvard, this celebrated polyglot was known as “The Great Gerschenkron.” He was an influential economic theorist who knew twenty languages and so much about so many other things that he was offered chairs in three departments. All this after beginning life with traumatic dramatic escapes from the Bolsheviks (in 1920) and the Nazis (in 1938). Riveting and eloquent, The Fly Swatter's most unusual accomplishment is that it succeeds in telling the extraordinary story of a man's soul.

Nicholas Dawidoff is the author of The Catcher was a Spy: The Mysterious Life of Moe Berg and In the Country of Country: A Journey to the Roots of American Music, and is the editor of the Library of America’s Baseball: A Literary Anthology. He is also a contributor to The New Yorker, The American Scholar, and The New York Times Magazine. A graduate of Harvard University, he has been a Guggenheim Fellow and a Berlin Prize Fellow of the American Academy. He and his wife live in New York.

“A captivating memoir . . . showing personal triumphs over adversity. . . .The boy can do it.” -Sylvia Nasar, The New York Times Book Review

“Wonderfully rich and precise. . . . Do me a favor. . . read the first paragraph.” --Erik Lundegaard, The Seattle Times/Post Intelligencer

“Both a study of the immigrant experience and a vivid picture of mid-century intellectual life at America's preeminent university. But most of all it is a touching portrait of a complex and staggeringly learned individual, written by one of the few people he allowed to touch his heart.” –Daniel Akst, Smithsonian

“Dawidoff’s captivating family memoir is a tribute to his twice-exiled grandfather, the Harvard economist Alexander Gerschenkron, retracing his tortuous path to Cambridge and recounting the intellectual passion that earned Gerschenkron the title ‘the last man with all known knowledge.’” —The New York Times Book Review

“This is a splendidly crafted book: partly a valuable estimate of Gerschenkron's place in the history of theory, partly a study of academic life and politics in the 20th century and above all a thoughtful and often charming personal memoir.” —St. Louis Post-Dispatch

“It wouldn’t be an overstatement to say this loving memoir is the most fascinating in its class.” —Chicago Tribune

“A loving, carefully researched, effortless-seeming book—a delight to read. The story of the great Alexander Gerschenkron as told by his grandson combines the smallest and most telling personal details with an exhilarating wide-angle view of twentieth-century intellectual life.” —Ian Frazier, author of Family and Great Plains

“The Fly Swatter is a terrific book for many reasons. Amateur students . . . will appreciate Dawidoff’s discussion of economic theory. Historians will likewise enjoy his chronicle of a human character moving through world events. . . . Dawidoff’s unusual perspective as a grandson might be most compelling for another set of readers.” —The Austin Chronicle

“To give birth to one’s own grandfather is no mean feat, but that is exactly Dawidoff’s great triumph. The Fly Swatter is a densely imagined, beautifully written book.” —Peter Carey, author of True History of the Kelly Gang

“If [Alexander Gerschenkron] has access to a celestial computer and can download (or perhaps upload?) Nicky Boy’s moving tribute, he must be proudly savoring every word.” —The New Leader