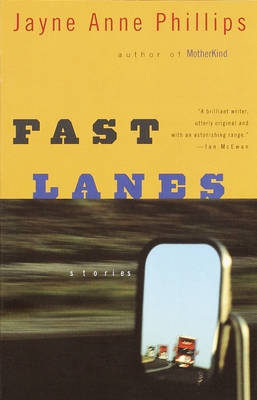 
Email or call for price.
Jayne Anne Phillips has always been a master of portraiture, both in her widely acclaimed novels and in her short fiction.  The stories in Fast Lanes demonstrated the breadth of her talent in a tour de force of voices, offering elegantly rendered views into the lives of characters torn between the liberation of detachment and the desire to connect.

Three stories are collected in this edition for the first time: in "Alma," and adolescent daughter is made the confidante of her lonely mother; "Counting" traces the history of a dommed love affair; and "Callie" evokes memories of the haunting death of a child in 1920's West Virginia.  Along with the original seven stories from Fast Lanes--each told in extraordinary first person narratives that have been hailed by critics as virtuoso performances--these incandescent portraits offer windows into the lives of an entire generation of Americans, demonstrating again and again why Jayne Anne Phillips remains one of our most powerful writers.
Jayne Anne Phillips was born in Buckhannon, West Virginia. She is the author of three novels, MotherKind (2000), Shelter (1994) and Machine Dreams (1984), and two collections of widely anthologized stories, Fast Lanes (1987) and Black Tickets (1979). She is the recipient of a Guggenheim Fellowship, two National Endowment for the Arts Fellowships, and a Bunting Fellowship. She has been awarded the Sue Kaufman Prize for First Fiction (1980) and an Academy Award in Literature (1997) by the American Academy of Arts and Letters. Her work has been translated into twelve languages, and has appeared in Granta, Harper’s, DoubleTake, and The Norton Anthology of Contemporary Fiction. She is currently Professor of English and Director of the MFA Program at Rutgers-Newark, the State University of New Jersey. Her new novel, Lark and Termite, is forthcoming from Knopf.
"Ms. Phillips's ear is almost unerring.... As ever, whe writes beautifully, capturing elusive moods with startling images and scenes."  -Michiko Kakutani, The New York Times

"A brilliant writer, utterly original and with an astonishing range." --Ian McEwan