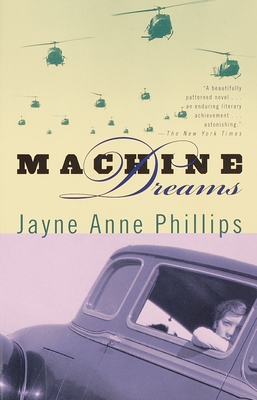 In her highly acclaimed debut novel, the bestselling author of Shelter introduces the Hampsons, an ordinary, small-town American family profoundly affected by the extraordinary events of history. Here is a stunning chronicle that begins with the Depression and ends with the Vietnam War, revealed in the thoughts, dreams, and memories of each family member. Mitch struggles to earn a living as Jeans becomes the main breadwinner, working to complete college and raise the family. While the couple fight to keep their marriage intact, their daughter Danner and son Billy forge a sibling bond of uncommon strength. When Billy goes off to Vietnam, Danner becomes the sole bond linking her family, whose dissolution mirrors the fractured state of America in the 1960s. Deeply felt and vividly imagined, this lyrical novel is "among the wisest of a generation to grapple with a war that maimed us all" (The Village Voice), by a master of contemporary fiction.

Jayne Anne Phillips was born in Buckhannon, West Virginia. She is the author of three novels, MotherKind (2000), Shelter (1994) and Machine Dreams (1984), and two collections of widely anthologized stories, Fast Lanes (1987) and Black Tickets (1979). She is the recipient of a Guggenheim Fellowship, two National Endowment for the Arts Fellowships, and a Bunting Fellowship. She has been awarded the Sue Kaufman Prize for First Fiction (1980) and an Academy Award in Literature (1997) by the American Academy of Arts and Letters. Her work has been translated into twelve languages, and has appeared in Granta, Harper’s, DoubleTake, and The Norton Anthology of Contemporary Fiction. She is currently Professor of English and Director of the MFA Program at Rutgers-Newark, the State University of New Jersey. Her new novel, Lark and Termite, is forthcoming from Knopf.
"A beautifully patterned novel . . . an enduring literary achievement . . . astonishing."—The New York Times"Machine Dreams, in its wisdom and its compassionate, utterly unsentimental rendering of the American condition, will rank as one of the great books of [the] decade. Jayne Anne Phillips is a blessing."—Robert Stone"An intensely Ameican, beautifully written first novel. . . . It carries the strength of myth, and yet is utterly of our times."—The Wall Street Journal