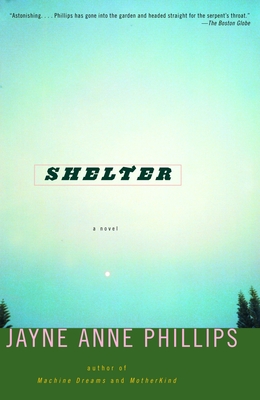 
Usually Arrives in Store in 1-5 Days
In a West Virginia forest in 1963, a group of children at summer camp enter a foreboding Eden and experience an unexpected rite of passage. Shelter is an astonishing portrayal of an American loss of innocence as witnessed by a mysterious drifter named Parson, two young sisters, Lenny and Alma, and a feral boy called Buddy. Together they come to understand bravery and the importance of compassion.
Phillips unearths a dangerous beauty in this primeval terrain and in the hearts of her characters. Lies, secrets, erotic initiations, and the bonds of love between friends, families, and generations are transformed in a leafy wilderness undiminished by societal rules and dilemmas. Cast in Phillips’ stunning prose, with an unpredictable cast of characters and a shadowy, suspenseful narrative, Shelter is a an enduring achievement from one of the finest writers of our time.
Jayne Anne Phillips was born in Buckhannon, West Virginia. She is the author of three novels, MotherKind (2000), Shelter (1994) and Machine Dreams (1984), and two collections of widely anthologized stories, Fast Lanes (1987) and Black Tickets (1979). She is the recipient of a Guggenheim Fellowship, two National Endowment for the Arts Fellowships, and a Bunting Fellowship. She has been awarded the Sue Kaufman Prize for First Fiction (1980) and an Academy Award in Literature (1997) by the American Academy of Arts and Letters. Her work has been translated into twelve languages, and has appeared in Granta, Harper’'s, DoubleTake, and The Norton Anthology of Contemporary Fiction. She is currently Professor of English and Director of the MFA Program at Rutgers-Newark, the State University of New Jersey. Her new novel, Lark and Termite, is forthcoming from Knopf
“Astonishing. . . . Phillips has gone into the garden and headed straight for the serpent’s throat.” –The Boston Globe

“Mesmerizing. . . . The physical world is so thoroughly and beautifully evoked that within pages we’re completely drawn in.” –The Washington Post

“Written in prose that is often breathtakingly beautiful, Shelter is a rich, vivid novel of moral and psychological complexity destined to stand alongside works by Faulkner and other masters of Southern literature.” –Vanity Fair

“This defiant, frighteningly beautiful novel is as disturbing as its setting. Built to last, Shelter feels like Phillips’ bid for immortality.” –Harper’s Bazaar