The Weed That Strings the Hangman's Bag: A Flavia de Luce Novel (Paperback) 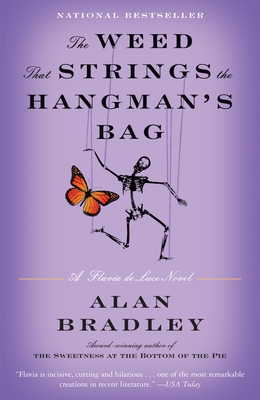 The Weed That Strings the Hangman's Bag: A Flavia de Luce Novel (Paperback)

This is book number 2 in the Flavia de Luce series.

NATIONAL BESTSELLER • “Flavia is incisive, cutting and hilarious . . . one of the most remarkable creations in recent literature.”—USA Today

Flavia de Luce, a dangerously smart eleven-year-old with a passion for chemistry and a genius for solving murders, thinks that her days of crime-solving in the bucolic English hamlet of Bishop’s Lacey are over—until beloved puppeteer Rupert Porson has his own strings sizzled in an unfortunate rendezvous with electricity. But who’d do such a thing, and why? Does the madwoman who lives in Gibbet Wood know more than she’s letting on? What about Porson’s charming but erratic assistant? All clues point toward a suspicious death years earlier and a case the local constables can’t solve—without Flavia’s help. But in getting so close to who’s secretly pulling the strings of this dance of death, has our precocious heroine finally gotten in way over her head?

BONUS: This edition includes an excerpt from Alan Bradley's A Red Herring Without Mustard, discussion questions, and an essay by the author.
Alan Bradley is the New York Times bestselling author of many short stories, children’s stories, newspaper columns, and the memoir The Shoebox Bible. His first Flavia de Luce novel, The Sweetness at the Bottom of the Pie, received the Crime Writers’ Association Debut Dagger Award, the Dilys Award, the Arthur Ellis Award, the Agatha Award, the Macavity Award, and the Barry Award, and was nominated for the Anthony Award. His other Flavia de Luce novels are The Weed That Strings the Hangman’s Bag, A Red Herring Without Mustard, I Am Half-Sick of Shadows, Speaking from Among the Bones, The Dead in Their Vaulted Arches, As Chimney Sweepers Come to Dust, Thrice the Brinded Cat Hath Mew’d, and The Grave’s a Fine and Private Place, as well as the ebook short story “The Curious Case of the Copper Corpse.”
“Flavia is incisive, cutting and hilarious . . . one of the most remarkable creations in recent literature.”—USA Today

“Bradley takes everything you expect and subverts it, delivering a smart, irreverent, unsappy mystery.”  —Entertainment Weekly

“A pitch-perfect performance that surpasses an already worthy debut.”—Houston Chronicle