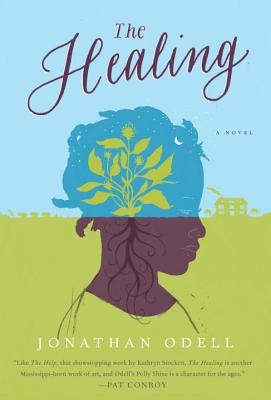 “During the years before the Civil War, Master Ben purchases Polly Shine, a slave woman known to possess healing powers, to help 'doctor' his slaves suffering from a mysterious plague. Polly also needs to pass on her healing knowledge to the next generation and focuses on Granada, a young slave girl. Granada is not so willing to accept her gift and is not interested in learning anything from Polly. Despite Granada's impatience and resistance, Polly teaches her that the gift of healing is much more than just learning to heal.”
— Julia Barth, Blue Willow Bookshop, Houston, TX

"Compelling, tragic, comic, tender and mystical... Combines the historical significance of Kathryn Stockett's "The Help" with the wisdom of Toni Morrison's "Beloved."" --"Minneapolis Star Tribune
"
Rich in mood and atmosphere, "The Healing" is a warmhearted novel about the unbreakable bonds between three generations of female healers and their power to restore the body, the spirit, and the soul.
In Antebellum Mississippi, Granada Satterfield has the mixed fortune to be born on the same day that her plantation mistress's daughter, Becky, dies of cholera. Believing that the newborn possesses some of her daughter's spirit, the Mistress Amanda adopts Granada, dolling her up in Becky's dresses and giving her a special place in the family despite her husband's protests. But when The Master brings a woman named Polly Shine to help quell the debilitating plague that is sweeping through the slave quarters, Granada's life changes. For Polly sees something in the young girl, a spark of "The Healing," and a domestic battle of wills begins, one that will bring the two closer but that will ultimately lead to a great tragedy. And seventy-five years later, Granada, still living on the abandoned plantation long after slavery ended, must revive the buried memories before history repeats itself.
Inspirational and suspenseful, "The Healing" is the kind of historical fiction readers can't put down--and can't wait to recommend once they've finished.
"A remarkable rite-of-passage novel with an unforgettable character. . . . "The Healing "transcends any clichEs of the genre with its captivating, at times almost lyrical, prose; its firm grasp of history; vivid scenes; and vital, fully realized people, particularly the slaves with their many shades of color and modes of survival." --"The Associated Press"

JONATHAN ODELL is the author of the acclaimed novel "The View from Delphi," which deals with the struggle for equality in pre-civil rights Mississippi, his home state. His short stories and essays have appeared in numerous collections. He spent his business career as a leadership coach to Fortune 500 companies and currently resides in Minnesota.

A finalist for the Minnesota Book Award!

"A remarkable rite-of-passage novel with an unforgettable character ... The Healing transcends any clichés of the genre with its captivating, at times almost lyrical, prose; its firm grasp of history; vivid scenes; and vital, fully realized people, particularly the slaves with their many shades of color and modes of survival."
—The Associated Press

"Compelling, tragic, comic, tender and mystical ... This is a beautiful book, well crafted and textured. It combines the historical significance of Kathryn Stockett's The Help with the wisdom of Toni Morrison's Beloved."
—Minneapolis Star Tribune

"A gripping, beautiful, and moving tale ... Add it to your summer reading list — you'll be glad that you did."
—Burlington Times-News

"A terrific novel that will take its place in the distinguished pantheon of Southern fiction. Like The Help, that showstopping work by Kathryn Stockett, The Healing is another Mississippi-born work of art and Odell's Polly Shine is a character for the ages."
—Pat Conroy, author of The Prince of Tides and South of Broad

"Jonathan Odell won me over with his fresh take on an 1860's Mississippi plantation, and the connective power of story to heal body, mind and community. Long after closing the novel's final pages, I'm still marveling about Polly Shine, an inventively subversive slave healer, and a character I won't soon forget."
—Lalita Tademy, author of Cane River, an Oprah's Book Club selection, and Red River

"When the young slave Granada Satterfield reluctantly undertakes a quest to recover her own identity, she finds that she must begin by seeking the answers to two questions: Who are my people and what are their stories? Jonathan Odell's compelling new novel The Healing is a lyrical parable, rich with historical detail and unflinching in the face of disturbing facts."
—Valerie Martin, author of the Orange Prize winning novel Property

"Jonathan Odell gives voice to strong women at a time in history when their strength might have been their undoing. When Polly Shine's fierce knowledge comes up against Granada's stubborn resistance, the reader is held captive as the two attempt to resolve their conflict and Granada is made to face her destiny. This moving story is a must-read for fans of historical fiction."
—Kathleen Grissom, author of The Kitchen House

"The Healing is a moving cri de coeur for all those who yearn to be free, and for the wise women among us who understand that to subjugate one person is to subjugate all of humanity."
—Robin Oliveira, author of My Name if Mary Sutter

"Odell stirs lyricism and sentiment into a well-researched epic of slavery and emancipation that will endear itself to the spirituality inclined."
—Kirkus Reviews

"Bringing exciting verisimilitude to an overworked genre, this Southern saga from Odell is rich in character and incident."
—Publishers Weekly

"The pre-Civil War South is beautifully rendered in Jonathan Odell's The Healing, its sure sense of time and place enhanced by believably drawn characters and their stories. . . . Jonathan Odell finds the right words, using the language of the day, its idiom and its music to great advantage in a compelling work that can stand up to The Help in the pantheon of Southern literature."
—Shelf Awareness