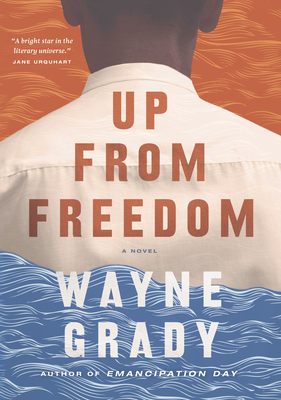 For readers of Colson Whitehead, James McBride, Yaa Gyasi and Lawrence Hill, Up From Freedom is a powerful and emotional novel about the dangers that arise when we stay silent in the face of prejudice or are complicit in its development.

As a young man, Virgil Moody vowed he would never be like his father, he would never own slaves. When he moves from his father's plantation in Savannah to New Orleans, he takes with him Annie, a tiny woman with sharp eyes and a sharper tongue, who he is sure would not survive life on the plantation. She'll be much safer with him, away from his father's cruelty. And when he discovers Annie's pregnancy, already a few months along, he is all the more certain that he made the right decision.

As the years pass, the divide between Moody's assumptions and Annie's reality widens ever further. Moody even comes to think of Annie as his wife and Lucas as their son. Of course, they are not. As Annie reminds him, in moments of anger, she and Moody will never be equal. She and her son are enslaved. When their "family" breaks apart in the most brutal and tragic way, and Lucas flees the only life he's ever known, Moody must ask himself whether he has become the man he never wanted to be--but is he willing to hear the answer?

Stretching from the war-torn banks of the Rio Brazos in Texas to the muddy waters of Freedom, Indiana, Moody travels through a country on the brink of civil war, relentlessly searching for Lucas and slowly reconciling his past sins with his hopes for the future. When he meets Tamsey, a former slave, and her family trying to escape the reach of the Fugitive Slave Act, Moody sees an opportunity for redemption. But the world is on the cusp of momentous change, and though some things may be forgotten, nothing is ever really forgiven.

WAYNE GRADY is the award-winning author of more than a dozen works of nonfiction and is also one of Canada's top literary translators. He is also the author of two novels, Up From Freedom and Emancipation Day, a national bestseller that won the 2013 Amazon.ca First Novel Award and was longlisted for the Scotiabank Giller Prize. Grady lives in Kingston, Ontario, with his wife, the novelist and creative nonfiction writer, Merilyn Simonds.

"Powerful. . . . Forgiveness is not easy, nor is the story that Grady tells. . . . But at a time when racism and violence is still tearing at America—and Canada—it is a timely story that sheds light on how far we have and have not come. . . . [Up From Freedom] is a deeply layered story well told." —Toronto Star

"Up From Freedom is an exceptional novel. . . . [It] brings all of [Grady's] skill as a writer to the page, and his story is one you will not forget." —Waterloo Chronicle

"This is a moving and eye-opening reminder of history's deep scars. In the best tradition of Toni Morrison and Colson Whitehead, Grady brings home the truth that there are no simplistic ways to combat and overcome deep-rooted hate and fear." —Booklist, starred review

"Harrowing . . . [and] meticulously researched. . . . What does it mean to 'own' somebody? How much harm and violence are caused by that notion? What is 'freedom'? What is 'redemption'? Deep dives into the unsettling and murky past of one family." —Margaret Atwood

"In Up From Freedom, Wayne Grady has written an arresting novel about the United States bustling into the age of steam as it also drifts helplessly towards a catastrophic civil war. It is a novel that wisely, compassionately and movingly brings to vivid life a cast of characters, black and white, struggling in the snares of slavery and racism. It is a rare achievement, a novel that is both timely and timeless, a book that locates conscience and hope at the very center of human existence." —Guy Vanderhaeghe, author of The Englishman's Boy, The Last Crossing and A Good Man

"Wayne Grady's Up From Freedom pulls history from fiction and fiction from history in a way we very much need in these troubled, ever-evolving times. Focusing on the issues of race and self-identity on a continent built by whites on the backs of blacks forcibly removed from their continent, it examines not only the clash of two colors but the inevitable blending of them and its far-reaching and profound implications. The subject matter of the book comes to life on the printed page in this inter-generational, inter-racial book by way of a riveting narrative and a cast of complex, appealing characters. Up From Freedom is an important and engaging book." —Wayne Johnston, author of the nationally bestselling Son of a Certain Woman

"Grady writes with such careful devotion to history and human character that the private conflicts in this story perfectly expose the racial tumult of the 1830s in America. His language is forthright; his point of view unsparing; and he guides us through the landscape of slavery by walking just ahead of it and holding up a mirror." —Linda Spalding, author of The Purchase and A Reckoning

"From its powerful opening scene, to its poignant finale, Up From Freedom captures both the heart and the intellect of the reader. Grady's creation is a bright star in the literary universe. A wonderful and important achievement." —Jane Urquhart, author of The Stone Carvers

"I was seduced into this story, into a search for redemption that opened up into a rich, complex world and a wonderful narrative of a man at the crossroads of change. Grady's fully-realized characters left me always wanting to know more." —Philip Akin, Artistic Director of Obsidian Theatre Company