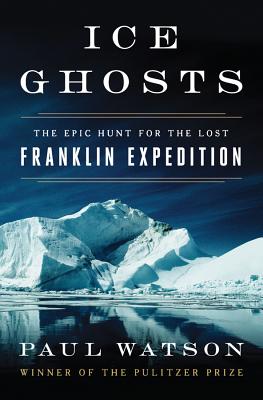 The spellbinding true story of the greatest cold case in Arctic history—and how the rare mix of marine science and Inuit knowledge finally led to the recent discovery of the shipwrecks.

Spanning nearly 200 years, Ice Ghosts is a fast-paced detective story about Western science, indigenous beliefs, and the irrepressible spirit of exploration and discovery. It weaves together an epic account of the legendary Franklin Expedition of 1845—whose two ships, the HMS Erebus and the HMS Terror, and their crew of 129 were lost to the Arctic ice—with the modern tale of the scientists, researchers, divers, and local Inuit behind the recent discoveries of the two ships, which made news around the world.

The journalist Paul Watson was on the icebreaker that led the expedition that discovered the HMS Erebus in 2014, and he broke the news of the discovery of the HMS Terror in 2016. In a masterful work of history and contemporary reporting, he tells the full story of the Franklin Expedition: Sir John Franklin and his crew setting off from England in search of the fabled Northwest Passage; the hazards they encountered and the reasons they were forced to abandon ship after getting stuck in the ice hundreds of miles from the nearest outpost of Western civilization; and the dozens of search expeditions over more than 160 years, which collectively have been called “the most extensive, expensive, perverse, and ill-starred…manhunt in history.”

All that searching turned up a legendary trail of sailors’ relics, a fabled note, a lifeboat with skeletons lying next to loaded rifles, and rumors of cannibalism…but no sign of the ships until, finally, the discoveries in our own time. As Watson reveals, the epic hunt for the lost Franklin Expedition found success only when searchers combined the latest marine science with faith in Inuit lore that had been passed down orally for generations.

Ice Ghosts is narrative nonfiction of the highest order, full of drama and rich in characters: Lady Jane Franklin, who almost single-handedly kept the search alive for decades; an Inuit historian who worked for decades gathering elders’ accounts; an American software billionaire who launched his own hunt; and underwater archaeologists honing their skills to help find the ships. Watson also shows how the hunt for the Franklin Expedition was connected to such technological advances as SCUBA gear and sonar technology, and how it ignited debates over how to preserve the relics discovered with the ships.

A modern adventure story that arcs back through history, Ice Ghosts tells the complete and incredible story of the Franklin Expedition—the greatest of Arctic mysteries—for the ages.

Paul Watson is the author of Where War Lives and the recipient of the Pulitzer Prize, the National Headliner Award, the George Polk Award, and the Robert Capa Gold medal. He lives in Vancouver, British Columbia.
[A] thrilling tale of science’s hunt to solve one of naval history’s greatest riddles…[Watson’s] intimate familiarity with key players and places gives the reader an insider’s view of the operations.
— Gemma Tarlach - Discover Magazine

Intriguing [and] enjoyable…While there have been many previous books about the Franklin expedition and its mysterious fate, the notable originality of Ice Ghosts lies in the fact that it brings the story right up-to-date…Franklin aficionados will certainly want to add it to their libraries.