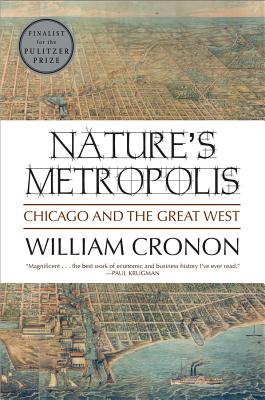 A Finalist for the Pulitzer Prize and Winner of the Bancroft Prize. "No one has written a better book about a city…Nature's Metropolis is elegant testimony to the proposition that economic, urban, environmental, and business history can be as graceful, powerful, and fascinating as a novel." —Kenneth T. Jackson, Boston Globe

In this groundbreaking work, William Cronon gives us an environmental perspective on the history of nineteenth-century America. By exploring the ecological and economic changes that made Chicago America's most dynamic city and the Great West its hinterland, Mr. Cronon opens a new window onto our national past. This is the story of city and country becoming ever more tightly bound in a system so powerful that it reshaped the American landscape and transformed American culture. The world that emerged is our own.

William Cronon is Frederick Jackson Turner Professor of History, Geography, and Environmental Studies at the University of Wisconsin, Madison.
This book is the story of Chicago's progress in the 19th century, the rough seduction of the hinterland, and how at its zenith the city ruled the commercial life of a vast inland region more completely and ruthlessly and profitably than any czar ruled Russia…A marvelous book.
— Ward Just - Chicago Tribune

No one has ever written a better book about a city…No one has written about Chicago with more power, clarity and intelligence than Cronon.
— Kenneth T. Jackson - Boston Globe

An intoxicating piece of scholarship and enterprise…It is really a work of biography: a look at the life of Chicago.
— David Shribman - Wall Street Journal

Nature's Metropolis is that rare historical work which treats nature and the moral force we derive from it seriously…The roots of the modern environmental predicament are plainly visible in the economic dynamism that brought about the rise of Chicago in the mid-nineteenth century, which is a captivating story in its own right.

William Cronon challenges many of the conventions of both urban and western history in this pathbreaking book, and does so with unusual intelligence and elegance. More important, he helps lay the groundwork for a vital new field of scholarship: the history of the natural environment and its relationship to human society.
— Alan Brinkley, Columbia University