Beale Street Dynasty: Sex, Song, and the Struggle for the Soul of Memphis (Paperback) 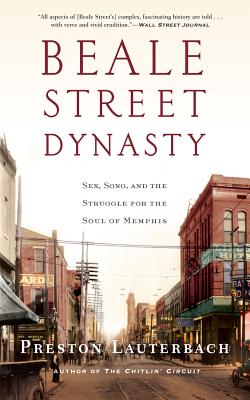 Beale Street Dynasty: Sex, Song, and the Struggle for the Soul of Memphis (Paperback)

A fascinating history of early Memphis—back when vice was civic duty.

Between Reconstruction and Prohibition, Beale Street in Memphis thrived as a strip with a unique soul that reshaped American culture. Preston Lauterbach recounts the rise and fall of Beale Street through the life of the South’s first black millionaire, an ex-slave who built an underworld dynasty in the booming river town and created a space for black culture to flourish. A thrilling narrative history, Beale Street Dynasty tells an intriguing, previously unknown story about race in an American city.

Preston Lauterbach is the author of Bluff City, Beale Street Dynasty, The Chitlin’ Circuit, a Wall Street Journal and Boston Globe book of the year, and co-author of Brother Johnson: Growing Up with Robert Johnson. He is a former visiting scholar at Rhodes College and a Virginia Humanities Fellow. He lives in Virginia.
Adds a fascinating chapter to civil rights history. But for all the hatred it depicts, this gracefully written book never loses sight of the fun that made Handy exalt that stretch of dirt road.
— James Gavin - New York Times Book Review

Preston Lauterbach has conjured a fascinating demimonde that’s dead and gone. Here Lauterbach gives us Beale in its heyday…and deftly paints a portrait of the one improbable millionaire who towered over this vibrant world.
— Hampton Sides, best-selling author of On Desperate Ground and Hellhound on His Trail

[Lauterbach’s] reporting is fact-based, layered and detailed. His skill as a writer is to interweave historical facts with the stories of the characters that populated Beale Street and its surrounds.
— Charles R. Cross - Seattle Times

Could an African-American political dynasty, against all odds, have managed real power in a Southern city a century ago? Preston Lauterbach tells the tale authoritatively and with flair.
— Luc Sante, author of Low Life

Preston Lauterbach takes readers on an uproarious, sometimes shocking jaunt through Memphis history by way of Beale Street, the remarkable thoroughfare that has hosted the likes of W. C. Handy, Ida B. Wells, and Richard Wright. Beale Street Dynasty is a compelling, witty, deeply researched, and always enlightening book.

Lauterbach has become one of my favorite people to read on 20th-century popular music.
— John Jeremiah Sullivan, author of Pulphead