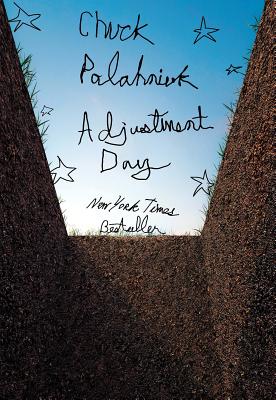 This is Palahniuk at his best. A completely (hopefully) insane scenario where our country runs amok when a group of men decide to overthrow the government and those they brand as elitist with violence and install themselves as the new ruling class and then divide the United States into three regions based on race and sexual orientation. As improbable as many of the things that come to pass are in this novel, Palahniuk deftly skewers the subconscious of our society and seemingly has a great time doing it. The reader will have a great time too and one can only shake their head and laugh to themselves while marveling at what a wild genius this writer is.

Adjustment Day is an ingenious darkly comic work in which Chuck Palahniuk does what he does best: skewer the absurdities in our society. Geriatric politicians bring the nation to the brink of a third world war to control the burgeoning population of young males, while working-class men dream of burying the elites. Adjustment Day’s arrival makes real the logical conclusion of every separatist fantasy, alternative fact, and conspiracy theory lurking in the American psyche.

Chuck Palahniuk is the best-selling author of more than eighteen fictional works, including Fight Club, Invisible Monsters, Survivor, Choke, Lullaby, Diary, Haunted, Rant, Pygmy, Tell-All, Damned, Doomed, Beautiful You and The Invention of Sound. He lives in the Pacific Northwest.

A quick, horrifying descent into madness and murder, gorgeous in its psychotic build-up and over-the-top execution.
— Jason Sheehan

A novel made out of the times we’re living in.
— Graeme McMillan

Palahniuk toys with our cultural dividing lines.… The result is a novel that straddles both the horrific and the absurd, kind of like present-day America.
— Peter Rugh

A send-up of the many absurdities in our society.
— Mackenzie Dawson

[Palahniuk] joins Sinclair Lewis and George Orwell in Dystopia.… There are traces of noir, magical realism, sf, and horror. It’s all there, with the power to amuse, astound, and provoke.

Palahniuk takes the United States’ divided politics to an extreme conclusion and proves along the way that his gift for social satire has only sharpened with time.

Visionary and fearless… perhaps [Palahniuk’s] darkest, most biting satire to date.… [R]azor-sharp insights and boundless imagination are matched only by his ability to make even the most stomach-churning scenes somehow vividly entertaining.… [E]qual parts Jonathan Swift and Tyler Durden.

A dystopian nightmare that takes all the fractures of our modern society and escalates them to a perverted climax.