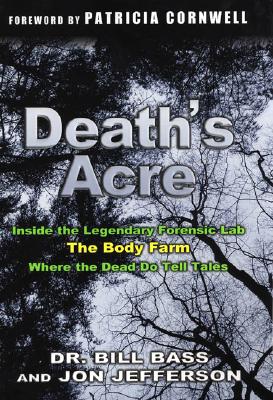 Nowhere is there another lab like Dr. Bill Bass's: On a hillside in Tennessee, human bodies decompose in the open air, aided by insects, bacteria, and birds, unhindered by coffins or mausoleums. At the "Body Farm," nature takes its course, with corpses buried in shallow graves, submerged in water, concealed beneath slabs of concrete, locked in trunks of cars. As stand-ins for murder victims, they serve the needs of science - and the cause of justice.

For thirty years, Dr. Bass's research has revolutionized the field of forensic science, particularly by pinpointing "time since death" in murder cases. In this riveting book, he investigates real cases and leads readers on an unprecedented journey behind the locked gates of the Body Farm. A master scientist and an engaging storyteller, Bass shares his most intriguing work: his revisit of the Lindbergh kidnapping and murder, fifty years after the fact; the mystery of a headless corpse whose identity astonished the police; the telltale bugs that finally sent a murderous grandfather to death row; and many more.

Jon Jefferson is a veteran journalist, science writer, and documentary filmmaker. His writing has been featured by The New York Times, Newsweek, USA Today, and Popular Science.