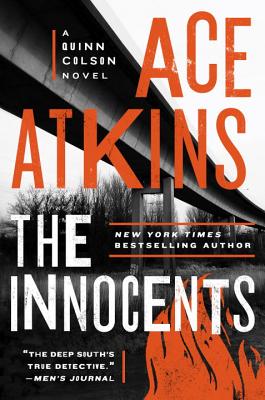 This is book number 6 in the A Quinn Colson Novel series.

Quinn Colson returns to Jericho, Mississippi, and gets pulled back into a world of greed and violence in this gritty, darkly comic tale from New York Times bestselling Southern crime master Ace Atkins.

After being voted out of office and returning to the war zone he’d left behind, Quinn Colson is back in Jericho, trying to fix things with his still-married high school girlfriend and retired Hollywood stuntman father. Quinn knows he doesn't owe his hometown a damn thing, but he can't resist the pull of becoming a lawman again and accepts a badge from his former colleague, foul-mouthed acting Sheriff Lillie Virgil. Both officers have fought corruption in Tibbehah County before, but the case they must confront now is nothing like they've ever seen...

When a former high school cheerleader is found walking a back road completely engulfed in flames, everyone in Jericho wants answers for the senseless act of violence. As Quinn and Lillie uncover old secrets and new lies, the entire town turns against them, and they soon learn that the most dangerous enemies may be the ones you trust most.
Ace Atkins is the New York Times bestselling author of the Quinn Colson novels, the first two of which—The Ranger and The Lost Ones—were nominated for the Edgar Award for Best Novel (he also has a third Edgar nomination for his short story, “Last Fair Deal Gone Down”). In addition, he is the author of several New York Times bestselling novels in the continuation of Robert B. Parker’s Spenser series. Before turning to fiction, he was a correspondent for the St. Petersburg Times, a crime reporter for the Tampa Tribune, and, in college, played defensive end for the undefeated Auburn University football team (for which he was featured on the cover of Sports Illustrated). He lives in Oxford, Mississippi.
Praise for The Innocents

“[N]othing short of riveting, a page turner that you will stay up all night to read....Atkins is a master of description on all points of the continuum....While I inwardly groan at the thought of having to wait another year for more Quinn Colson, my feelings are balanced by the certainty that it will be worth it.”—Bookreporter.com

“The rough-and-tumble relationship between two tough-as-nails law officers and the place they love provides plenty of action [and] well-developed characters.”—Kirkus Reviews

“Quinn has to be the most refreshing New York Times Bestselling series character (there are numerous unsung independent publishing protagonists just as worthy) that I’ve come across in quite some time, and I’m hard pressed to name others that compare on this level—and, holy hell, that’s an invigorating statement to make…What else is there to say...read The Innocents by Ace Atkins. It’s literary crime fiction worthy of the hype.”—CriminalElement.com