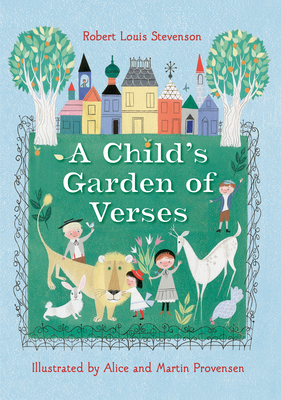 How do you like to go up in a swing,
Up in the air so blue?
Oh, I do think it the pleasantest thing
Ever a child can do!

Robert Louis Stevenson’s rhymes have charmed children and adults alike since 1885, when they first appeared to a delighted public. Stevenson’s joyful exploration of the world speaks directly from a child’s point of view and celebrates the child’s imagination. This Golden Books edition, originally published in 1951, features lively, colorful illustrations by Caldecott Medalists Alice and Martin Provensen. The original artwork has been digitally restored for this edition—resulting in a stunning, best-ever reproduction!

ROBERT LOUIS STEVENSON (1850–1894) was a Scottish novelist, poet, essayist, and travel writer. A literary celebrity in his lifetime, he is best known for his works Treasure Island, Kidnapped, and The Strange Case of Dr. Jekyll and Mr. Hyde.

ALICE AND MARTIN PROVENSEN began to illustrate children’s books together in 1946, many of them for Golden Books: The Fuzzy Ducking; The Golden Book of Fun and Nonsense; The Golden Treasury of Myths and Legends; The Iliad and the Odyssey; and The Color Kittens, one of the most beloved Golden Books ever. The Provensens won the Caldecott Medal in 1984 for The Glorious Flight, which they also wrote. Martin Provensen passed away in 1987.