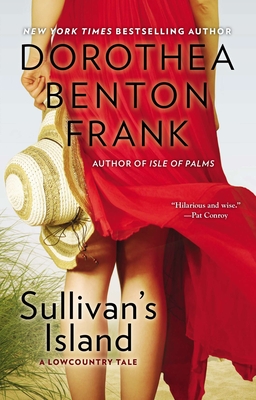 This is book number 1 in the Lowcountry Tales series.

Set in the steamy, stormy landscape of South Carolina, this New York Times bestseller from the author of Queen Bee is the unforgettable story of one woman’s courageous journey toward truth…

Born and raised on idyllic Sullivan’s Island, Susan Hayes navigated through her turbulent childhood with humor, spunk, and characteristic Southern sass. But years later, she is a conflicted woman with an unfaithful husband, a sometimes resentful teenage daughter, and a heart that aches with painful, poignant memories. And as Susan faces her uncertain future, she realizes that she must go back to her past. To the beachfront house where her sister welcomes her with open arms. To the only place she can truly call home...
Dorothea Benton Frank was born and raised on Sullivan's Island in South Carolina. She was the New York Times bestselling author of numerous novels, including Sullivan's Island, Plantation, Pawleys Island, Shem Creek, and Isle of Palms.
Praise for Sullivan's Island

“The setting and the characters are blazingly authentic…Frank evokes the eccentric Hamilton family and their feisty Gullah housekeeper with originality and conviction; Susan herself—smart, sarcastic, funny and endearingly flawed—makes a lively and memorable narrator. Thanks to these scrappily compelling portraits, this is a rich read.”—Publishers Weekly (starred review)

“Sullivan’s Island is hilarious and wise, an up-to-the-minute report on what it is like to be alive and female in the South Carolina Lowcountry today.”—Pat Conroy

“In Sullivan’s Island, southern womanhood has found a new voice, and it is outrageous, hilarious, relentless and impossible to ignore.”—John Berendt

“Frank’s wit, her fast pacing and the details of Lowcountry life and place give the novel a solid grounding…The book’s greatest pleasure lies in the delightfully realized Susan, who has all the pluck, charm and gutsy good humor anyone might wish for.”—The State

“One heck of a beach book…Frank keeps you reading compulsively.”—The Charlotte Observer

“Filled with lowcountry and Gullah legend, this delightful contemporary romance is a very moving story of family, love and place.”—Knoxville News-Sentinel