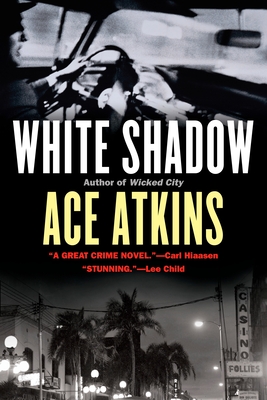 
On Our Shelves Now
“This book succeeds both as a first-rate historical novel and as a superb crime story. It packs the emotional wallop of Dennis Lehane’s Mystic River. It is as gritty as James Ellroy’s L.A. Confidential. And yet, the prose is as lyrical as James Lee Burke’s Crusader’s Cross. With White Shadow, Atkins has found his true voice.”—Associated Press

1955: Tampa, Florida is a city pulsing with Sicilian and Cuban gangsters, cigar factories, sweet rum, and violence. The death of retired kingpin Charlie Wall—the White Shadow—has shocked the city, sending cops, reporters, and associates scrambling to find those responsible. As the trail winds through neighborhoods rich and poor, enmeshing the innocent and corrupt alike all the way down to the streets and casinos of Havana, an extraordinary story of revenge, honor, and greed emerges. For Charlie Wall had his secrets—secrets that if discovered could destroy a criminal empire and ignite a revolution.
Ace Atkins is the New York Times bestselling author of the Quinn Colson novels, the first two of which—The Ranger and The Lost Ones—were nominated for the Edgar Award for Best Novel (he also has a third Edgar nomination for his short story, “Last Fair Deal Gone Down”). In addition, he is the author of several New York Times bestselling novels in the continuation of Robert B. Parker’s Spenser series. Before turning to fiction, he was a correspondent for the St. Petersburg Times, a crime reporter for the Tampa Tribune, and, in college, played defensive end for the undefeated Auburn University football team (for which he was featured on the cover of Sports Illustrated). He lives in Oxford, Mississippi.
Praise for White Shadow

“A mesmerizing read. With wonderful detail of character and history, this novel is a tour de force from one of the best crime writers at work today.”—Michael Connelly

“Ace Atkins makes 1950s Florida as cool and hip as tomorrow in this outstanding novel. It’s a stunning achievement and sure to be a book of the year.”—Lee Child

“A rich, powerful novel that is to south Florida what James Ellroy’s L.A. Confidential is to Los Angeles.”—Robert Crais

“Classic Florida noir, a great crime novel set in the fabulously crime-ridden '50s. Ace Atkins has done a superb job of re-creating old Tampa, a place whose underworld was as dangerous and debauched as Chicago's in its prime.”—Carl Hiaasen

“A wild ride. This is a big-time crime novel crammed with violence, sex and some pretty good riting that makes it hard to put down.”—Kirkus Reviews

“Too often, historical mysteries are more history than mystery, but Atkins does a fine job of giving us a richly detailed portrait of a fascinating time and place without ever losing the compelling forward thrust of a taut and suspenseful tale.”—St. Louis Post-Dispatch