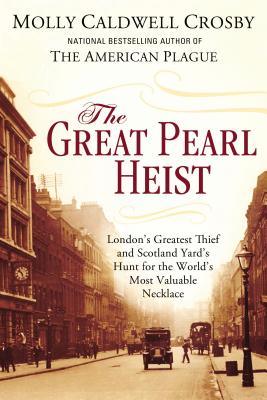 By Molly Caldwell Crosby
$25.95
Email or call for price.

“This is the true story of the heist of the most valuable pearl necklace in the world in 1913 London by one of the biggest international jewel thieves and the man who sent him to jail. This little-known case is a great read about how Scotland Yard began to use forensic sleuthing to solve crimes as well as a compelling description of how the criminals were almost able to get away with the theft.”
— Beth Carpenter, The Country Bookshop, Southern Pines, NC

"Molly Caldwell Crosby, author of "The American Plague "and "Asleep, " once again brings forgotten history to vivid life in an absorbing account of crime and deduction in the early days of the twentieth century...."

In the summer of 1913, under the cover of London's perpetual smoggy dusk, two brilliant minds are pitted against each other a celebrated gentleman thief and a talented Scotland Yard detective in the greatest jewel heist of the new century. An exquisite strand of pale pink pearls, worth more than the Hope Diamond, has been bought by a Hatton Garden broker. Word of the Mona Lisa of Pearls spreads around the world, captivating jewelers as well as thieves. In transit to London from Paris, the necklace vanishes without a trace.

Joseph Grizzard, the King of Fences, is the charming leader of a vast gang of thieves in London's East End. Grizzard grew up on the streets of Whitechapel during the terror of Jack the Ripper to rise to the top of the criminal world. Wealthy, married, a father, Grizzard still cannot resist the sport of crime, and the pearl necklace proves an irresistible challenge.

Inspector Alfred Ward patrols the city's dark, befogged streets before joining the brand-new division of the Metropolitan Police known as detectives. Ward earns his stripes catching some of the great murderers of Victorian London and, at the height of his career, is asked to turn his forensic talents to finding the missing pearls and the thief who stole them.

In the spirit of "The Great Train Robbery" and the tales of Sherlock Holmes, this is the true story of a psychological cat-and-mouse game set against the backdrop of London's golden Edwardian era. Thoroughly researched, compellingly colorful, "The Great Pearl Heist" is a gripping narrative account of this little-known, yet extraordinary crime.

Molly Caldwell Crosby is the national bestselling author of "Asleep: The Forgotten Epidemic that Remains One of Medicine s Greatest Mysteries" and "The American Plague: The Untold Story of Yellow Fever, the Epidemic That Shaped Our History," which has been nominated for several awards. Crosby holds a master of arts degree in nonfiction and science writing from Johns Hopkins University and previously worked for "National Geographic" magazine. Her writing has appeared in "Newsweek," "Health," and "USA" "Today," among others."

"A gem...In her well-researched account, Crosby recounts the theft, the gang of thieves behind it and Scotland Yard's hunt for the culprints. Her story is rich in the lore of London's famed underworld."--Newsday

"Crosby's thriller-style account is backed up by her intensive research...Another compelling popular history."--Booklist

"A narrative that manages to remain both exciting and informative...plenty of nefarious action."--The Memphis Commercial Appeal

"Rich and evocative...Crosby has written a book that is as enchanting and irresistible as its subject."--Candice Millard

"Fast paced, full of twists and turns, and rich in detail...Crosby tells us a fascinating story rooted in such deep historical research that we can practically watch the drama unfold in real time."--Jeffrey H. Jackson, author of Paris Under Water

Acclaim for the works of Molly Caldwell Crosby