The Curse of the Crystal Cavern (The Pathfinders Society #2) (Hardcover) 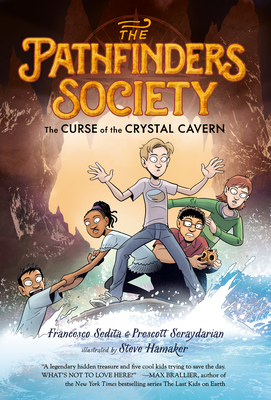 The Curse of the Crystal Cavern (The Pathfinders Society #2) (Hardcover)

This is book number 2 in the The Pathfinders Society series.

The rollicking Pathfinders treasure hunt continues as the five campers from Mystery of the Moon Tower get swept away in a new search for clues that may lead to untold riches hidden away long ago. This action-packed graphic novel is full of fun, magic, and friendship--sure to appeal to fans of the Last Kids on Earth and Lumberjanes series.

Fresh from their hair-raising adventures in The Mystery of the Moon Tower, Kyle, Vic, Beth, Harry, and Nate are now hot on the trail of something big! A secret staircase leads down into the unknown, setting them on an exciting chase for clues left by the wealthy explorer Henry Merriweather, who was rumored to have hidden away a priceless treasure. Are the legends real? Where will the five friends end up? And what dangers will they encounter along the way? Because as they've come to learn, everything comes at a price...

In this exciting graphic novel adventure series, richly illustrated by Eisner-award-winning artist Steve Hamaker, the Pathfinders go ever deeper into the labyrinthian Merriweather mystery--and hope they'll come out the other side!

"A legendary hidden treasure, a guy who collects stuff in a mysterious castle, and five cool kids trying to connect the dots and save the day. What's not to love here?"
--Max Brallier, author of the Last Kids on Earth series
Francesco Sedita is the creator of the Miss Popularity books series, the Emmy-winning Who Was? Show on Netflix, and many other books in his job at Penguin Young Readers. Prescott Seraydarian is a children's video producer and educator. He is the owner-director of Lunch Productions, an award-winning production company and also teaches film at the George School in Newtown, PA.

Steve Hamaker is the Eisner Award-winning colorist of bestselling graphic novel series such as Bone by Jeff Smith and HiLo by Judd Winick. He has also colored online comic series and created his own original webcomic PLOX. An avid tabletop and video gamers, Steve lives in Columbus, Ohio, with his wife and son. Follow him on Twitter @Stevehamaker.
"Sedita and Seraydarian’s plot packs a ton of humor, mystery, and action to enthrall fans of fantastical fun adventures. Hamaker’s artwork, meanwhile, offers just the right amount of zany energy in its paneling and its eye-catching use of colors and secondary details. Marvelously clever and cool."
—Kirkus Reviews

"Readers will happily suspend their disbelief as they become immersed in the story and will find themselves almost breathless from the nonstop action. Detailed, colorful, and expressive art works well with the text to depict a tale full of thrills and danger, as well as bravery and humor. This wild adventure is pure fun at a breakneck pace."
—School Library Journal