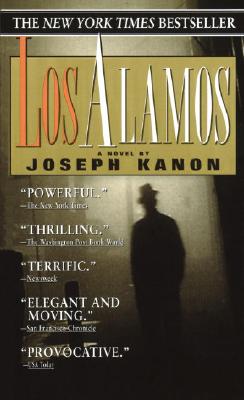 In a dusty, remote community of secretly constructed buildings and awesome possibility, the world's most brilliant minds have come together. Their mission: to split an atom and end a war. But among those who have come to Robert Oppenheimer's "enchanted campus" of foreign-born scientists, baffled guards, and restless wives is a simple man, an unraveler of human secrets—a man in search of a killer.

It is the spring of 1945. And Michael Connolly has been sent to Los Alamos to investigate the murder of a security officer on the Manhattan Project. But amid the glimmering cocktail parties and the staggering genius, Connolly will find more than he bargained for. Sleeping in a dead man's bed and making love to another man's wife, Connolly has entered the moral no-man's-land of Los Alamos. For in this place of discovery and secrecy, hope and horror, Connolly is plunged into a shadowy war with a killer—as the world is about to be changed forever....

Joseph Kanon is the internationally bestselling author of eight novels, which have been published in twenty-four languages, including: Los Alamos, which won the Edgar Award for best first novel, The Good German, which was made into a film starring George Clooney and Cate Blanchett, The Prodigal Spy, Alibi, which earned Kanon the Hammett Award of the International Association of Crime Writers, Istanbul Passage, and Leaving Berlin. He is also a recipient of the Anne Frank Human Writers Award for his writings on the aftermath of the Holocaust. He lives in New York City with his wife, literary agent Robin Straus. They have two sons.

“A magnificent work of fiction . . . It’s a love story inside a murder mystery inside perhaps the most significant story of the 20th century: the making of the atomic bomb. . . . A stunning achievement.”—The Boston Globe

“Thrilling . . . Kanon writes with the sure hand of a veteran and does a marvelous job.”—The Washington Post Book World