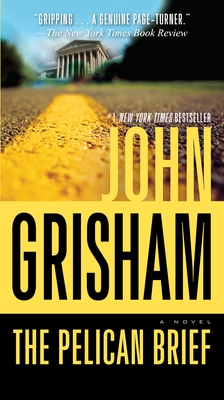 By John Grisham
$9.99
On Our Shelves Now

To Darby Shaw it was no more than a legal shot in the dark, a brilliant guess. To the Washington establishment it’s political dynamite. Suddenly Darby is witness to a murder–a murder intended for her. Going underground, she finds that there is only one person–an ambitious reporter after a newsbreak hotter than Watergate–she can trust to help her piece together the deadly puzzle. Somewhere between the bayous of Louisiana and the White House’s inner sanctums, a violent cover-up is being engineered. For someone has read Darby’s brief–someone who will stop at nothing to destroy the evidence of an unthinkable crime.

John Grisham has written twenty-one novels, including the recent #1 New York Times bestsellers The Associate and The Appeal, as well as one work of nonfiction, The Innocent Man. He lives in Virginia and Mississippi. His new book from Doubleday is Ford County Stories.

"Grisham has done it again!"—Chicago Tribune.

"A fast-paced thriller…it's got the unmistakable Grisham style—conspiracy in high places, evil  and innocent lawyers, assassins and a plot that  will keep you reading into the small hours of the  morning."—Cincinnati  Post

“There is a propulsiveness to [Grisham’s] narrative that keeps the pages turning briskly.”—People