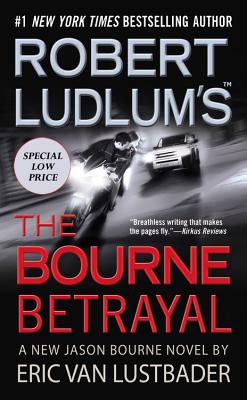 This is book number 5 in the Jason Bourne Series series.

Already devastated by loss, Bourne is shattered by a report that his last friend in the world, Martin Lindros has gone missing. A CI deputy director, Lindros was in Ethiopia
tracking suspicious shipments of yellowcake uranium and atomic bomb weaponry. His last lifeline to humanity, Bourne will not let Lindros go. Despite his hatred for CI, Bourne sets out to rescue his friend and finish the job: dismantling a terrorist network determined to build nuclear armaments by cutting off their source of money. But Bourne doesn't realize that these men, Islamic supremacists, are leaders of an incredibly dangerous, technologically savvy group with ties from Africa, across the Middle East, and into Eastern Europe and Russia. They have predicted Bourne's every move, and are counting on his unwitting help in their plans to destroy America.
Eric Van Lustbader is most widely known as the New York Times bestselling author of twenty international bestselling thrillers including Ninja and Black Heart. He is also the author of two successful and highly regarded series of fantasy novels, The Sunset Warrior Cycle and The Pearl Saga. His novels have been translated into over twenty languages. www.ericvanlustbader.com Robert Ludlum was the author of twenty-seven novels, each one a New York Times bestseller. There are more than 225 million of his books in print, and they have been translated into thirty-two languages. He is the author of The Scarlatti Inheritance, The Chancellor Manuscript, and the Jason Bourne series -- The Bourne Identity, The Bourne Supremacy, and The Bourne Ultimatum -- among others. Mr. Ludlum passed away in March 2001. To learn more, visit www.Robert-Ludlum.com.