The Sum of All Fears (A Jack Ryan Novel #5) (Paperback) 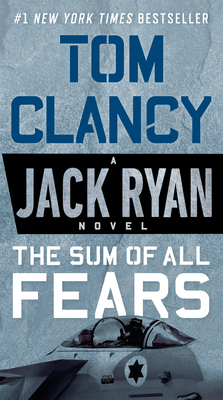 The Sum of All Fears (A Jack Ryan Novel #5) (Paperback)

This is book number 5 in the A Jack Ryan Novel series.

The search for a stolen nuclear weapon on American soil sends Jack Ryan on a dangerous mission with global consequences in this #1 New York Times bestselling thriller.

Peace may finally be at hand in the Middle East, as Jack Ryan, Deputy Director of Intelligence for the CIA, lays the groundwork for a plan that could end centuries of conflict. But ruthless terrorists have a final, desperate card to play: a nuclear weapon hidden somewhere in the United States.

With one terrible act, distrust mounts, forces collide, and the floundering U.S. president seems unable to cope with the crisis. With the world on the verge of nuclear disaster, Ryan must frantically seek a solution—before the chiefs of state lose control of themselves and the world.
A little more than thirty years ago Tom Clancy was a Maryland insurance broker with a passion for naval history. Years before, he had been an English major at Baltimore’s Loyola College and had always dreamed of writing a novel. His first effort, The Hunt for Red October—the first of the phenomenally successful Jack Ryan novels—sold briskly as a result of rave reviews, then catapulted onto the New York Times bestseller list after President Reagan pronounced it “the perfect yarn.” From that day forward, Clancy established himself as an undisputed master at blending exceptional realism and authenticity, intricate plotting, and razor-sharp suspense. He passed away in October 2013.
Praise for The Sum of All Fears

“The Sum of All Fears delivers!”—People

“A nonstop roller coaster ride to a nail-biting climax...ingenious.”—Publishers Weekly

“Tom Clancy at his best...This is a book not to be missed.”—Dallas Morning News