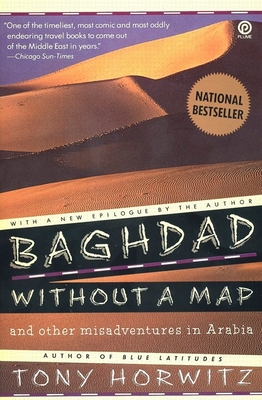 By Tony Horwitz
$16.00
Backordered -- Email or Call for Availability

With razor-sharp wit and insight, intrepid journalist Tony Horwitz gets beyond solemn newspaper headlines and romantic myths of Arabia to offer startling close-ups of a volatile region few Westerners understand. His quest for hot stories takes him from the tribal wilds of Yemen to the shell-pocked shores of Lebanon; from the malarial sands of the Sudan to the eerie souks of Saddam Hussein’s Iraq, a land so secretive that even street maps and weather reports are banned.

As an oasis in the Empty Quarter, a veiled woman offers tea and a mysterious declaration of love. In Cairo, “politeness police” patrol seedy nightclubs to ensure that belly dancers don’t show any belly. And at the Ayatollah’s funeral in Tehran a mourner chants, “Death to America,” then confesses to the author his secret dream—to visit Disneyland.

Careening through thirteen Muslim countries and Israel, Horwitz travels light, packing a keen eye, a wicked sense of humor, and chutzpah in almost suicidal measure. This wild and comic tale of Middle East misadventure reveals a fascinating world in which the ancient and the modern collide.

Tony Horwitz was a native of Washington, D.C., and a graduate of Brown University and Columbia University's Graduate School of Journalism. As a foreign correspondent, he covered wars and conflict in the Middle East, Africa, and Eastern Europe, mainly for the Wall Street Journal. Returning to the U.S., he won a Pulitzer Prize for national reporting and wrote for the New Yorker. He was a fellow at the Radcliffe Institute for Advanced Study and president of the Society of American Historians. His books include the national bestsellers Confederates in the Attic, Blue Latitudes, Baghdad Without a Map and A Voyage Long and Strange.

Praise for Baghdad without a Map and other Misadventures in Arabia

“As a document of the cultural impasse that brought on the war, this is unsurpassed.”—Village Voice

“A timely and incisive insider’s description of the mysterious Arab World...Tony Horwitz is an ideal guide for American Reader.”—Chicago Tribune