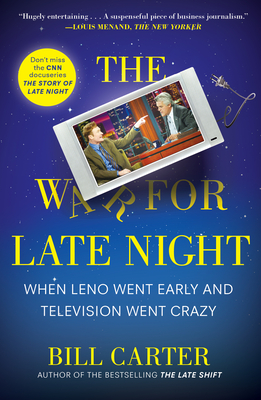 
Usually Arrives in Store in 1-5 Days
Bill Carter, executive producer of CNN’s docuseries The Story of Late Night and host of the Behind the Desk: Story of Late Night podcast, details the chaotic transition of The Tonight Show from host Jay Leno to Conan O’Brien—and back again.

In 2010, NBC’s CEO Jeff Zucker, had it all worked out when he moved Jay Leno from behind the desk at The Tonight Show, and handed the reins over to Conan O'Brien. But his decision was a spectacular failure. Ratings plummeted, affiliates were enraged—and when Zucker tried to put everything back the way it was, that plan backfired as well.

No one is more uniquely suited to document the story of a late-night travesty than veteran media reporter and bestselling author, Bill Carter. In candid detail, he charts the vortex that sucked in not just Leno and O'Brien—but also Letterman, Stewart, Fallon, Kimmel, and Ferguson—as frantic agents and network executives tried to manage a tectonic shift in television’s most beloved institution.
Bill Carter joined The New York Times as a national media reporter in 1989. He is the author of the New York Times bestseller The Late Shift, two other books on the television industry, Monday Night Mayhem and Desperate Networks, and has written numerous articles for The New York Times Magazine and other publications. He has been a guest on Nightline, Today, CNN, Charlie Rose, NBC Nightly News with Brian Williams, and many other shows. He is the executive producer of CNN's docuseries The Story of Late Night and host of the Behind the Desk: Story of Late Night podcast.
Praise for The War for Late Night

“As thorough and detailed a story as he tells, Mr. Carter entertains us every step of the way, peppering the page with more rich comedic details than your average late-night monologue.”—The New York Times

“A boisterous, two-timing, high-stakes drama about the business of comedy at a sinking TV network.”—Associated Press