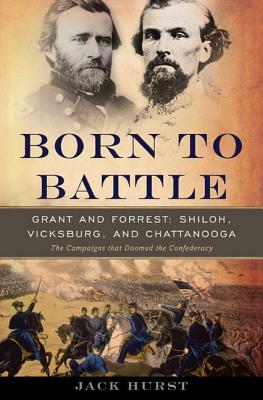 By Jack Hurst
Usually Arrives in Store in 1-5 Days

Hurst shows how Grant and Forrest brought to the battlefield the fabled virtues of the American working-class: hard work, ingenuity, and intense determination. Each man's background contributed to his triumphs on the battlefield, but the open-mindedness of his fellow commanders proved just as important. When the North embraced Grant, it won a stalwart defender. When the South rejected Forrest, by contrast, it sealed its fate.

Jack Hurst is a historian and former journalist who has written for newspapers including the Chicago Tribune, Philadelphia Inquirer, and Nashville Tennessean. His books include Nathan Bedford Forrest: A Biography, and Men of Fire. A native of Maryville, Tennessee and a descendant of both Union and Confederate soldiers, he currently lives with his wife outside Nashville, Tennessee.

Publishers Weekly
“Making sophisticated use of archival and printed sources, Hurst maintains that the marginalization of Forrest, a blacksmith's son, by a Confederacy insisting on ‘blue-blood leadership' was ‘a chief cause of the Confederacy's death.' The Union, by contrast, made effective use of the equally lowborn and unpolished Grant. Both, Hurst asserts, exemplified the common men who did most of the war's dying. Both understood what soldiers could do in particular situations. And both were accustomed by peacetime hardship to the fears and anxieties of wartime command. The comparison…is original and provocative.”

American History
“[A] well-told take on a great face-off.”

Kirkus Reviews
“A lively narrative of the Civil War's Western theatre, too often overshadowed by the better known armies and battles in the East.... Hurst amply illustrates the misery visited upon Tennessee and Mississippi as the armies moved back and forth across the land, along with the backbiting, blunders and inflated egos that abounded in both armies.”

Gordon C. Rhea, author of Carrying the Flag
“Jack Hurst's Born to Battle brings the American Civil War's Western Theater alive through dramatic portraits of Ulysses S. Grant and Nathan B. Forrest. The product of working-class backgrounds, each general approached warfare with a uniquely American blend of cunning, resourcefulness, and resolve—traits that both contributed to their successes and baffled their superiors. Masterfully recounted, this gripping tale will enthrall seasoned Civil War buffs and history novices alike.”

John F. Marszalek, Giles Distinguished Professor Emeritus of History, Mississippi State University, and Executive Director of the Ulysses S. Grant Association
“Not all readers will agree with everything Jack Hurst says, but they will find the argument intriguing that a commoner won the Civil War because his side gave him the chance, while the Confederacy lost because it kept its most talented commoner at arms length.”

Ernest B. Furgurson, author of Chancellorsville 1863 and Not War But Murder: Cold Harbor 1864
“In a finely wrought battle narrative and character study, Jack Hurst shows how two men seemingly so different—one flamboyant and daring, the other solid and determined—became great soldiers by struggling not only against their enemies, but against their own inner demons.”

Robert Hicks, author of The Widow of the South and A Separate Country
“It is rare indeed to have a writer like Jack Hurst, both a careful and meticulous historian and a first-rate storyteller. Born to Battle is what Jack Hurst does best. Drawing on many years of examination and research, Hurst has laid out the details of history as if he were crafting an epic myth. Grant and Forrest come alive as they take on the roles of the very human giants of the war, battling through the western campaign in what would be the death knell of the Confederacy. Hurst's epic tale of history gives us a better understanding of why the war would be won or lost far from borders of Virginia.”