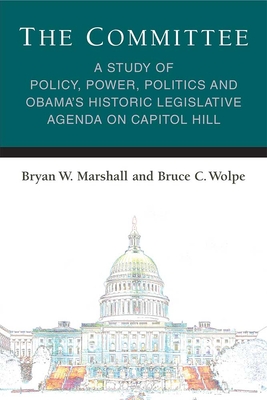 For three years while serving as a senior adviser to Rep. Henry A. Waxman (D-CA), chairman of the House Committee on Energy and Commerce—one of the most powerful committees in Congress—Bruce C. Wolpe kept a diary, a senior staffer’s look at how committees develop and promote legislation. With its insider’s view of the rough-and-tumble politics of cap-and-trade, healthcare reform, tobacco, oversight, and the debt ceiling agreement, The Committee uniquely melds the art of politics and policymaking with the theory and literature of political science. The authors engage with the important questions that political science asks about committee power, partisanship, and the strategies used to build winning policy coalitions both in the Committee and on the floor of the House. In this new edition, the authors revisit the relationship between the executive and Congress in the wake of the sweeping changes wrought by the Trump administration, as well as thoughts about how that relationship will change again as President Biden faces a 117th Congress that is strikingly similar to Obama’s 111th. The insider politics and strategies about moving legislation in Congress, from internal and external coalition building to a chairman’s role in framing policy narratives, will captivate both novice and die-hard readers of politics.

Bryan W. Marshall is Professor and Chair of the Department of Political Science at Miami University.

Bruce C. Wolpe has served as Chief of Staff to Julia Gillard, Australia’s 27th Prime Minister and Senior Adviser to Rep. Henry A. Waxman (D-CA), chair of the US House Committee on Energy and Commerce.

“Bryan Marshall and Bruce Wolpe have teamed up to produce a remarkable book that is sure to become an indispensable work on how Congress really works. Marshall, with the keen eye of a political scientist who has also worked inside Congress, meshes together the theory and practice of how Congress and specifically the House of Representatives works. From his vantage point in 2009 and 2010, beside the powerful House Energy and Commerce Committee Chairman Henry Waxman, Wolpe chronicles what it was like to be in the middle of some of the biggest legislative fights of the last 20 years. Wolpe, Chairman Waxman, House Democrats and President Obama won some legislative battles and lost others, but the real winners from this book will be the readers, students and teachers alike, their knowledge and understanding of how Capitol Hill often works but sometimes can't work is invaluable.”
—Charles E. Cook, Jr., Editor & Publisher, The Cook Political Report and Columnist, National Journal


“Political scientists and political practitioners rarely do anything together, not least write a reality-based book on one of the vital organs of the US legislative complex, the committee. One of the 111th Congress' super-staffers Bruce Wolpe and scholar Bryan Marshall have produced a masterful and human treatment of how politics churns through a powerful committee—probably the best such legislative story-telling since Eric Redman's masterful Dance of Legislation. A gripping and thoughtful read for those needing a dose these days on the considerable power of the legislative branch.”
—Steve Clemons, Editor at Large, The Atlantic


“A lively and penetrating treatment of the contemporary Congress sure to engage and educate students of American politics and policy. The Committee is deftly crafted around a fascinating insider journal kept during the 111th Congress by the senior advisor to House Energy and Commerce Committee Chairman Henry Waxman. Highly entertaining and enlightening.”
—Thomas E. Mann, University of California, Berkeley

“Marshall and Wolpe have written a unique book—truly one of kind. It is a well-crafted, fascinating account of major legislative episodes in the 111th Congress, President Obama’s first Congress, written by the lead staffer to a central player in those episodes and a sharp political scientist who worked for the party whip. From this team, you will learn that a talented committee chair played a vital role in building coalitions and passing major legislation even in an era of deeply polarized parties and assertive party leadership. Scholars will gain new insights and fresh perspective from the detailed accounts. Students will find a find a set of colorful stories that bring important themes to life. Citizens will gain a deeper appreciation for the permanent struggle of republican government.”
—Steven S. Smith, Washington University

“We live in a world where 24/7 we can get endless pundit commentary on permanent and crucial policy issues such as trade, healthcare, environment and debt/deficit. Bryan Marshall and Bruce Wolpe give us an insightful insider, not outsider, view with their analysis of the 2009–2012 111th Congress in “Committee: A Study of Policy Power, Politics and Obama’s Historic Legislative Agenda on Capitol Hill.” Veteran political scientist Marshall combines his academic expertise and one year’s APSA Congressional Fellowship on the staff of Rep. James Clyburn (D-SC) with Wolpe’s three year on-the-ground experience as a senior adviser to Energy and Commerce Committee chair Rep. Henry Waxman (D-CA). For teachers and students of American politics interested in the internal and external coalition building and a chairman’s role in the legislative process, this book takes us beyond such classics as Eric Redman’s Dance of Legislation. Importantly, the authors go well beyond the politics and the policy and provide the critical ingredient of the legislative process. Whether a novice or hard-core veteran of the Congress’s critical role in shaping our national priorities, you owe it to yourself to read this new University of Michigan analysis by Bryan Marshall and Bruce Wolpe.”
—Jeffrey R. Biggs, PhD, retired director of the American Political Science Association’s Congressional Fellowship Program

"The Committee knits together insight and context from political science with a fascinating blow-by-blow account of the policy battles waged in the House Energy and Commerce Committee throughout the first three years of the Obama administration. Readers will gain a deeper understanding of the variability, complexity, and challenges of policymaking in today’s party polarized House of Representatives."
—Frances E. Lee, University of Maryland

"Marshall and Wolpe deftly weave insider and academic views of Congress into a compelling narrative that makes the process come alive. This book will be of interest to new students of Capitol Hill politics and established scholars alike—and everyone in between."
—Charles J. Finocchiaro, University of Oklahoma

“Bryan Marshall and Bruce Wolpe have produced an indispensable book on how Congress really works.”

"Marshall and Wolpe bring a useful and illuminating perspective to the congressional literature by allowing readers a glimpse into the legislative sausage-making process during a seminal congressional term, while also engaging with the scholarly literature’s theoretical claims."
—Congress & the Presidency