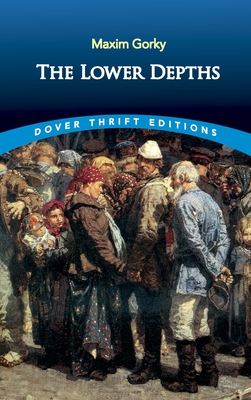 By Maxim Gorky
List Price: $3.00
Our Price: $1.50
(Save: $1.50 50%)
On Our Shelves Now
(This book cannot be returned.)
The first of Russia's great proletarian writers, Alexey Maximovich Peshkov (1868-1936) adopted the pen name of Gorky, meaning bitter. Drawing on his own experiences in the lowest social echelon, Gorky portrayed the wretched lives of down-and-outers, instilling his tales with heartfelt protest against a world that both tolerated and fostered the miseries of the underclass.
In The Lower Depths, his dramatic masterpiece of 1902, Gorky presents a grimly realistic view of a desperate circle of lost souls. The play unfolds in a derelict boarding house, where a cast of despairing characters argue, play cards, tell stories, and debate the merits of two opposite worldviews: a self-reliant existence free of illusions, or a romanticized outlook that softens the pain of daily life. A revealing look at the atmosphere that led to the 1917 Russian Revolution, the drama abounds in shrewd observations, lifelike characters, and compelling dialog that make it a work of enduring vitality.
Political activist and founder of the socialist realism literary method, Maxim Gorky (1868-1936) was a devoted Bolshevik until the 1917 Revolution, after which he lived in exile until Stalin enticed his return. The first of Russia's great proletarian writers, Gorky wrote short stories and novels that drew upon his own experiences for realistic portrayals of hardship and misery.